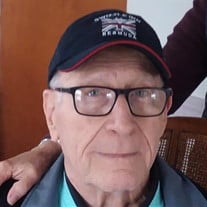 Aldo Richard Crespi, 90, of Pittsfield, passed away on Sunday, April 4, 2021. Born in Pittsfield, MA, on July 3, 1930, the son of the late Marco and Jenni Entruini Crespi, he graduated from Pittsfield High School with the class of 1948. Aldo was a Korean War Veteran. He enlisted in the United States Army in February of 1952, where he proudly served his country until his honorable discharge in April of 1960. During his time in the military, Aldo earned many honors, such as The Army of Occupational Medal in Germany and the National Defense Service Medal. He was especially proud of his service, particularly of his rank in the CO B 40th TK BN 4th Infantry Division. Later in life, Aldo was a member of the American Legion Post 155. After his time in the army, Aldo became a Master Carpenter, working for “Knobby” Marchetto. He built many of the homes in Pittsfield and was recognized as one of the best finishing carpenters in the area. For 60 years, he never missed his after-work outing to DelGallo’s, where he would socialize with his good friends, most notably Remo DelGallo and Joe Zatoski. He loved all his DelGallo friends, as well as those at Eastside (not to mention their pizza)! Among many things, Aldo was an avid Boston Red Sox and New England Patriots fan. He loved the game of golf and jumped at any opportunity to play a round. Aldo was predeceased by his beloved wife of 43 years, the former Barbara Dresser LeClair, whom he married on May 8, 1964. Barbara passed away in June of 2007. He is survived by his son, Marc R. Crespi, as well as his stepdaughters, Doreen Magnano, who was his loving caregiver, and her husband Vincent, and Donna LeClair of Mount Vernon, WA. He leaves his dear grandchildren, Gabe and Leah Crespi and Nicole O’Neil, as well as his 5 great grandchildren. Besides his wife and parents, Aldo was predeceased by his brother, Edward. Funeral Notice: Funeral services for Aldo R. Crespi will be held on Tuesday, April 13, 2021 at 11 a.m. the Unity Terrace at Dwyer-Wellington Funeral Home, 220 East Street, Pittsfield, MA 01201, with the Rev. A. Peter Gregory officiating. Burial with full military honors will follow at St. Joseph Cemetery. In lieu of flowers, donations can be made to the American Lung Association in care of the Dwyer-Wellington Funeral Home, 220 East Street, Pittsfield MA 01201, in his memory. Donations CANNOT be made online, but may be made through the Dwyer-Wellington Funeral Home.

Aldo Richard Crespi, 90, of Pittsfield, passed away on Sunday, April 4, 2021. Born in Pittsfield, MA, on July 3, 1930, the son of the late Marco and Jenni Entruini Crespi, he graduated from Pittsfield High School with the class of 1948. Aldo... View Obituary & Service Information

The family of Aldo R. Crespi created this Life Tributes page to make it easy to share your memories.

Aldo Richard Crespi, 90, of Pittsfield, passed away on Sunday,...

Send flowers to the Crespi family.