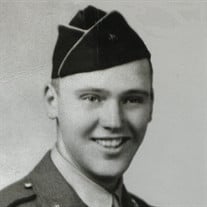 Alfred V. Simo, 96, of Pittsfield, MA, died at Berkshire Place on February 12 surrounded by his family. He leaves his wife of 72 years, Elizabeth (Bette) Simo, and seven children. Al and Bette were married at Notre Dame Church in Pittsfield in 1946. Born in New York City on Dec. 22, 1922, Alfred was the son of Fred and Stephanie (Ogris) Simo. He later lived with his grandparents, aunt, and uncle in Bolton Landing, NY. After high school graduation he began a Toolmaking Apprenticeship course at the Plastics Division of the General Electric Company in Pittsfield. He served in Italy during World War II with the 85th Infantry Regiment in the 10th Mountain Division of the U.S. Army. On April 14, 1945, near Castel d’Aiano, he was severely wounded in combat during a fierce battle in the Po Valley campaign. Staff Sergeant Simo was awarded the Purple Heart, the Silver Star medal and two bronze stars. Al was employed at GE for 43 years, first as a Class A toolmaker and later as a manufacturing engineering specialist in the Distribution Transformer department. Al was on the ski patrol at Bousquet’s, where he also taught his children to ski. He was a photographer as well as a camera and clock repairman. He was also a clockmaker and a member of the Berkshire Model Railroad Club. He also enjoyed many years of sailing with his family on Lake George in New York. Always generous with his time and talents, he is dearly missed by his wife and all those who knew him. Along with his wife, Bette, he is survived by his children: Charlene Seifert and her husband Dr. Frank Seifert of Old Field, NY; Raymond Simo and his wife Colleen of South Egremont; Melanie Muchow and her husband Brian of Newbury, NH; Lorraine Kolodziejczyk and her husband Richard of Hinsdale; Jeanne Benoit and her husband Dr. George Benoit of Gloucester; Corinne Skeels of Euliss, TX; and John Simo and his wife Kathleen of Simpsonville, SC. He also leaves 14 grandchildren and 15 great grandchildren. Al was predeceased by his loving granddaughter Cristin Benoit. Funeral Notice: A Liturgy of Christian Burial for Alfred V. Simo will be held at Sacred Heart Church on Friday, February 15, at 10a.m. Burial with full military honors will follow at St Joseph's Cemetery. In lieu of flowers, donations can be made to Soldier On in care of the Dwyer Funeral Home, 776 North St., Pittsfield, MA 01201 in his memory. DONATIONS CANNOT BE MADE ONLINE, but may be made through the Dwyer Funeral Home.

Alfred V. Simo, 96, of Pittsfield, MA, died at Berkshire Place on February 12 surrounded by his family. He leaves his wife of 72 years, Elizabeth (Bette) Simo, and seven children. Al and Bette were married at Notre Dame Church in Pittsfield... View Obituary & Service Information

The family of Mr. Alfred V. Simo created this Life Tributes page to make it easy to share your memories.

Send flowers to the Simo family.