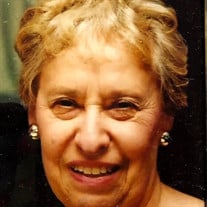 Alice (Balardini) Andrews, 96, passed away peacefully on Friday, June 18, 2021. Alice had lived in Dalton for the past 70 years, and was married to George O. Andrews, Jr. for 68 of those years, until his passing in March of 2019. Alice was born in Cheshire, MA on November 25, 1924, daughter of the late Monsueto and Rose Mary Gondelli Balardini. She was a 1942 graduate of Adams Memorial High School and attended the former Berkshire Business School. She later earned her Municipal Clerk Certificate from Salve Regina University in Newport, RI. Alice had worked for several years at the General Electric Company, starting out as a secretary and finishing as an expeditor. Following her time at GE, Alice pursued a career in public service with the Town of Dalton, serving as Assistant Town Clerk for 23 years. After a temporary appointment, Alice was then elected Town Clerk in 1984, making history as the first woman to hold that office in Dalton. She retired in 1987. Always together, Alice and her beloved husband, George, shared a very happy and active life. They were avid skiers and members of the National Ski Patrol at the former Brodie Mountain and Bousquet Ski Area. They belonged to the So-Ed Dance Club of Pittsfield, and for over 25 years, enjoyed ballroom dancing with the many friends they made there. For years, they started each day with a swim and a chat at the Dalton CRA, before making their way to the COA to visit friends there. Alice and George enjoyed much time with family, always there to celebrate the milestones of each generation. They were active, long-standing members of the First Congregational Church, where Alice taught Sunday School and was an enthusiastic volunteer. Alice is survived by niece Jacqueline (Kandrach) Healy; nephews George and Peter Kisselbrock, Fred Fuegel, and Jon Hespelein; great nephews Joel Kandrach, Jason, Justin and Joshua Kisselbrock, and Nicholas and Christian Healy; great nieces Jessica and Kara Kisselbrock. In addition to her husband, George, Alice was predeceased by sisters Elizabeth Kandrach and Dolly Hibbs; brother Romolo Balardini; nephews James, John and Joel Kandrach, and Rick Fuegel. Alice’s family would like to extend their heartfelt gratitude to the Visiting Angels for their outstanding love and care over the past 2 ½ years. FUNERAL NOTICE: Funeral Services for Alice B. Andrews will be private. Donations in her memory may be made to the First Congregational Church of Dalton Memorial Fund in care of the Dwyer-Wellington Funeral Home, 525 Main St., Dalton, MA 01226. Donations CANNOT be made online, but may be made through the Dwyer-Wellington Funeral Home.

Alice (Balardini) Andrews, 96, passed away peacefully on Friday, June 18, 2021. Alice had lived in Dalton for the past 70 years, and was married to George O. Andrews, Jr. for 68 of those years, until his passing in March of 2019. Alice was born... View Obituary & Service Information

The family of Mrs. Alice B. Andrews created this Life Tributes page to make it easy to share your memories.

Send flowers to the Andrews family.