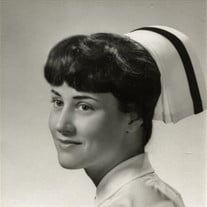 Mrs. Andrea Theresa Powers of Hinsdale, passed away on Tuesday, August 27, 2019. Daughter of the late George A. and Rita Bronson Allard, she was born in Bennington, VT., where she had many happy childhood memories growing up. Andrea was an adventurous child, loving to roller skate down the sidewalks in her neighborhood, ride down the ramp with her brother while visiting her father’s store, the Bennington Garage, and toboggan with her parents, brother, sister, and family friend, Fran, at the Bennington Country Club. She spent many happy summers with her family and friends fishing, swimming, and riding in her father’s boat on Hedge’s Lake. Andrea was an early traveler, riding on the bus with her doll at the age of five (always behind the bus driver) from Bennington, where her parents put her on, to North Adams, where her Aunt Mary and Uncle Frank would take her off. There, she spent many happy days with her beloved Aunt Ida, picking raspberries and tending to her aunt’s beautiful flower gardens. (She was also known to ride her tricycle around the living room while listening to “McNamara’s Band.”) Andrea loved traveling to the ocean, going with her family to Florida, as a child, and throughout her life. Later, she would spend many fun summers in Cape Cod with her husband and children, and most recently she loved her trips to Old Saybrook, CT. with her children. After graduating from Bennington High School, Andrea entered St. Luke’s Hospital School of Nursing, in Pittsfield, earning her degree as a registered nurse, graduating on her birthday, September 17, 1960, and becoming engaged on the very same day. A year later, she married her husband, Richard D. Powers, of Pittsfield, and would go on to celebrate 45 years of marriage before his passing in 2006. Andrea worked as a nurse at Hillcrest Hospital, where she dedicated thirty years, starting as a staff nurse and moving to the operating room where she became Head Nurse. She would go on to be Supervisor of the operating room, recovery room, and ambulatory surgery, performing all three positions simultaneously. A highly respected nurse, Andrea was a proud St. Luke’s alumni, and remained lifetime friends with all of her classmates, whom she held dear. She attended her annual nursing reunions faithfully and enjoyed many lunches with her nursing friends, as well as her friend “Meme’s" beautiful Christmas parties. Always a nurse, she was called upon countlessly through the years she lived in Hinsdale where she would go at the drop of a hat to help patch the knee of a child, place a splint on a finger, administer advice, or take care of someone who was ailing. She was an avid reader, a gifted gardener, an accomplished sewer and loved to do her crossword puzzles. She was a terrific listener, never gave unsolicited advice, and had an exceptional sense of humor. She was always there for her family and loved visits, dinners, trips and walks with her children and grandsons. She always appreciated and enjoyed her visits with her brother, sister-in-law, stepmother, Aunt Theresa, and niece, Erin. Recently, she especially enjoyed her time with her caretakers; Jenna Brunt, Amy Ellsworth, Regina Peck and Jade Machaffie, where you could always finding her laughing in the kitchen, on the porch, or in her office. Besides her children, Kellie Powers Meisl and her husband, Stephen, Colleen M. Powers, and her partner Kara Ottone, and Richard C. Powers, and his wife Lisa, Andrea leaves behind her brother, GG Allard and his wife, Angela, and her step-mother, Rita Allard. She is also survived by her grandchildren; Christopher R. Powers, Benjamin N. Meisl, and Nicholas J. Powers, and great-grandson, Christopher R. Powers Jr. Andrea was predeceased by her beloved husband, Richard D. Powers. She was also predeceased by her sister Rosemary Webster, and both of her parents. The family would also like to thank her doctor, Dr. Sharon Rawlings for her exceptional care. Andrea had many specialists throughout the year, but it was Dr. Rawlings who respectfully managed her care, made outstanding decisions, and became her most trusted confidante, at a time when she needed this most. We appreciate your many phone calls and visits, Dr. Rawlings. We would also like to thank Bill Marsh of Elder Services. His knowledge, compassion and outstanding attention to every detail, allowed Andrea to happily and comfortably live her final years in her own home, surrounded and taken care of by all of the people who loved her most. Funeral Notice: A graveside service will be held Tuesday, September 3, 2019 at 1 p.m. at the Bennington Park Lawn Cemetery, 207 South Street, Bennington, VT. There will be a time of prayer prior to the graveside service at 11 a.m. at the Dwyer Funeral Home, 776 North Street, Pittsfield, MA. Calling hours will be held on Monday, September 2, 2019, from 1 p.m. until 3 p.m. at the Dwyer Funeral Home. In lieu of flowers, donations can be made to St. Jude Children’s Research Hospital in care of the Dwyer Funeral Home, 776 North St., Pittsfield, MA 01201 in her memory. Donations CANNOT be made online, but may be made through the Dwyer Funeral Home.

Mrs. Andrea Theresa Powers of Hinsdale, passed away on Tuesday, August 27, 2019. Daughter of the late George A. and Rita Bronson Allard, she was born in Bennington, VT., where she had many happy childhood memories growing up. Andrea was an adventurous... View Obituary & Service Information

The family of Mrs. Andrea Theresa Powers created this Life Tributes page to make it easy to share your memories.

Mrs. Andrea Theresa Powers of Hinsdale, passed away on Tuesday,...

Send flowers to the Powers family.