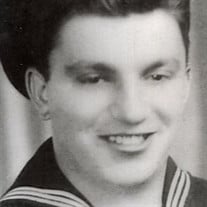 Armand Maffuccio, a member of the Greatest Generation, passed away peacefully on August 19 surrounded by the warmth and love of his family. Armand was born in the mountains of Monteverde in the Naples region of Italy, on October 12, 1921. He came with his parents, Ralph and Theresa (Mondelli) to America through Ellis Island in 1924 and made Pittsfield his life long home. Armand was an accomplished baker in both Pittsfield and Great Barrington. In Pittsfield he worked for some of the best and well-known family bakeries such as Joanne’s, Pittsfield Rye and Komenicki’s. He also was the pastry chef at the old Wendell Hotel and worked briefly at the Williams Inn on the campus of Williams College. Armand was the sole proprietor of the Tyler Bake Shop in the late 60’s. In Great Barrington, Armand was a partner with Herman Chrysnowski in the A&C Bakery on Main St. in the mid 1950’s. His children, grandchildren, family and friends always enjoyed his great pumpkin muffins, warm Italian bread, delicious jelly doughnuts and oversized chocolate chip cookies. Armand put full-time baking aside in 1970 and went to work for the Pittsfield Public School system as a custodian, where he remained until retirement in 1985. Students from Crosby and Pittsfield High, among other schools, were blessed with his friendliness, humor and genuine concern for their well-being. He continued baking part-time for Pittsfield Rye a number of years into his retirement from Pittsfield Public Schools. He was a proud World War II veteran, serving in the Navy on the aircraft carrier U.S.S. Enterprise. His ship was in many major battles in the Pacific. He wore his CV-6 hat and clothing often and, of course, proudly. It’s interesting to note that the boat that brought Armand to America was sold to the Japanese, retrofitted into a gun boat and subsequently destroyed by our Navy in the Pacific during WWII and during his tour of duty aboard the Enterprise in the Pacific. He developed a greater appreciation of his service time during the later years of his life. He was a member of the last reunion class of the Enterprise, visited the memorials in our nation’s capitol, participated in an honor flight and recently returned from a visit to a WWII memorial in New Orleans. Armand was preceded in death by his wife Grace (Polidoro) of 60 years, a daughter Donna who died at birth, his brother Frank and his two sisters, Donna Briggs and Josie Gilardi. He is survived by his daughter Carol Ann and son-in-law Lou, his son Richard and his wife Carol, five grandchildren, Christine and Michael Maffuccio and Steven, Louie and Jonathan Kuch and by his great granddaughter Anna Maffuccio. Armand is also survived by his dear friend Sandy Fidler. Together they travelled many places in the country, visited Italy, vacationed in the Caribbean and cruised the Atlantic. They shared an appreciation of WWII and enjoyed each other’s company immensely. Funeral Notice: Funeral services for Mr. Armand Maffuccio will be Thursday, August 22, 2019 at 10:30 a.m. from the Dwyer Funeral Home, with a Liturgy of Christian Burial at 11 a.m. at St. Mark’s Church, celebrated by Rev. Christopher Fedoryshyn, Pastor. Burial will follow at St. Joseph Cemetery. Calling hours at the Dwyer Funeral Home will be prior to the Liturgy from 9:30 to 10:30 a.m. In lieu of flowers, donations can be made to your local Disabled American Veterans organization, in care of the Dwyer Funeral Home, 776 North St., Pittsfield, MA 01201 in his memory. Donations CANNOT be made online, but may be made through the Dwyer Funeral Home. Anchors Away, Armand.

Armand Maffuccio, a member of the Greatest Generation, passed away peacefully on August 19 surrounded by the warmth and love of his family. Armand was born in the mountains of Monteverde in the Naples region of Italy, on October 12, 1921. He... View Obituary & Service Information

The family of Armand Maffuccio created this Life Tributes page to make it easy to share your memories.

Armand Maffuccio, a member of the Greatest Generation, passed...

Send flowers to the Maffuccio family.