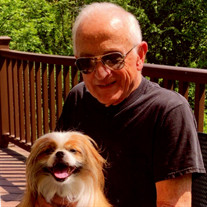 Mr. Bernard Roger Houle, 84, of Pittsfield, went peacefully to meet his Lord on Friday, February 14, 2020. Born in Pittsfield, MA, on December 10, 1935, the son of the late Oliver and Juliana Dargy Houle, he graduated from Pittsfield High School. Bernard was a member of the United States Army Reserves, where he proudly served his country. For 42 dedicated years, he worked as the sales manager for the Jones Division of Beloit Corporation, where he received the Chairman’s Award from Harnischfeger Industries for his outstanding service over those 42 years. He also worked at the Mobil service station in Coltsville for many years. Bernard was a devote Catholic and a communicant of St. Joseph Church in Pittsfield. He loved spending time with his family, and working in his yard, where he could enjoy watching the backyard birds. Bernard adored dogs and cats, especially his cat Spike. They always brought a smile to his face. As his coworkers could tell you, he never turned down the opportunity for a lunch with them at Teo’s. Besides his devoted wife of 58 years, the former Barbara Hamel, whom he married on August 5, 1961, Bernard is survived by his children, Margaret Smith (Lawrence), Patricia van Roekens (Craig) and Roger B. Houle (Shaunna). He leaves behind his friend and brother-in-law, Raymond Moffett, and his dear grandchildren; Lauren Seburn (Joshua), Andrew Smith, Evan, Ryan and Victoria van Roekens, and Jaelyn and Parker Houle. Bernard is also survived by his great granddaughter, Avery Seburn. He was predeceased by his sister, Rita E. Moffett. While Bernard will be dearly missed, he leaves a legacy of love, faith, and family, which will be carried on by all of the many lives he has touched. Funeral Notice: Funeral services for Mr. Bernard Roger Houle will be Friday, February 21, 2020 with a Liturgy of Christian Burial at 9:30 a.m. at St. Joseph’s Church, celebrated by the Msgr. Michael A. Shershanovich, Pastor. Burial will follow in St. Joseph Cemetery. There will be no formal calling hours. In lieu of flowers, donations can be made to the Berkshire Humane Society, Meals on Wheels, or Pregnancy Support Services in care of the Dwyer Funeral Home, 776 North St., Pittsfield, MA 01201 in his memory. Donations CANNOT be made online, but may be made through the Dwyer Funeral Home.

The family of Mr. Bernard R. Houle created this Life Tributes page to make it easy to share your memories.

Send flowers to the Houle family.