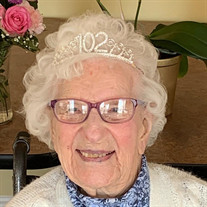 Mrs. Blanche Svoboda Cizek, age 102, formerly of Valley Stream, NY and Plainfield, MA passed away peacefully on Sunday, September 5, 2021 with her devoted son, daughter-in-law and niece at her side. She was born in Manhattan, NY, on March 10, 1919, the daughter of the late Stanley and Anonette Pikal Svoboda. Blanche admirably raised two sons, supported her loving husband, and unselfishly inspired others throughout her life while tirelessly running and managing their home. She learned to play the piano at a young age and continued her passion of playing endlessly on her beloved Steinway grand piano. Blanche was an opera enthusiast and enjoyed attending live performances at the Metropolitan Opera in New York City and later listening to opera music at home, both with her husband. However, her two sons never understood! She was an incredible cook who loved to make Czech meals for family. She was a devout Christian and very active in her churches – both in Valley Stream and later in Plainfield; as well as the Ladies Benevolent Society, the local food pantry and The Plainfield Post. Supporting family and friends were very important to her, and she welcomed late evening calls from anyone, especially her granddaughters who would often call at 10 pm after a long day at college. They often just needed to hear her voice but spoke at length. Her sons would often phone at that time, or even later, for the same reason. Blanche was a true lady in every sense of the word and in her gracious ways taught us all to be loving and caring human beings. She set the bar high and is an inspiration for us all. In contrast to all this, she followed and remained interested in the NASA Space Program from its origin to the present and cheered for her NY Giants football team for over 60 years, which may be a surprise to some. Blanche was predeceased by her beloved husband of nearly 59 years, Albert W. Cizek Jr., whom she married on September 7, 1940. She was also predeceased by her two brothers Stanley and Allen Svoboda. Sadly, she lost her older son, Richard, on May 1, 2021, after a lengthy battle with cancer. Like his mother, Richard fought to the absolute and bitter end. Blanche is survived by her son, Albert, his wife, Joan Mercuri Cizek, as well as her daughter-in-law, Carol Newfield Cizek. She leaves behind three cherished granddaughters, Laura Cizek Dushaney of Rock Hill, SC; Emma Cizek of Denver, CO and Ellen Cizek of Brookline, MA; two great-grandsons, Colin and Erin Dushaney as well as several nieces and nephews. Special thanks goes out to her niece, Susan Svoboda Maffe for her constant support and devotion and for being there whenever needed – especially at the very end. Funeral Notice: A private graveside service will be held on September 10, 2021 at Hilltop Cemetery in Plainfield, MA. An open memorial service will be held at 2 pm on Saturday, September 18 at the Plainfield Congregational Church, in Plainfield, MA. To best ensure everybody’s health, due to the recent rise in COVID cases, all attending this service are requested to wear face masks and practice social distancing. A gathering afterwards with consumables will be forsaken for the same reason. There will be no formal calling hours. In lieu of flowers, donations in her memory can be made to the American Cancer Society or American Heart Association in care of the Dwyer Funeral Home, 776 North Street, Pittsfield MA 01201, in her memory.

Mrs. Blanche Svoboda Cizek, age 102, formerly of Valley Stream, NY and Plainfield, MA passed away peacefully on Sunday, September 5, 2021 with her devoted son, daughter-in-law and niece at her side. She was born in Manhattan, NY, on March 10,... View Obituary & Service Information

The family of Mrs. Blanche Svoboda Cizek created this Life Tributes page to make it easy to share your memories.

Send flowers to the Cizek family.