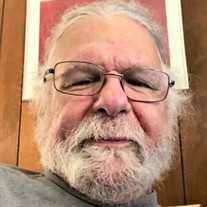 Bruce Lee Bixler, 69, a native of Pittsfield and longtime resident of New York, passed away at his home on Sunday, August 30, 2020. Born on November 22, 1950 in Schenectady, NY, to Kay (Albright) and Robert E. Bixler, he moved to Pittsfield in 1954 where he spent his youth. In 1971 Bruce earned an Associate Degree in Fine Arts from Berkshire Community College, where he was very active with the BCC Players theater group. From there he transferred to Southern Methodist University, graduating in 1973 with a BA in Fine Arts and soon after moved to the greater New York City area with his wife, Diana (Lee) Bixler, whom he later divorced. Bruce was involved with different theater production groups before spending more than two decades as a free-lance set decorator for movies and television commercials. He then went on to the Fashion Institute of Technology (FIT) in NYC where he put his creative energy into designing and implementing the exhibit spaces for several student shows each year. He returned to Pittsfield in 2015. Bruce was a highly intelligent and always inquisitive man. He was very well-read, especially in the fields of history and science, and enjoyed conversing on just about any topic, including a good political argument. He enjoyed playing the guitar, listening to most kinds of music, working with his hands, dabbling with watercolors, oils and Chinese calligraphy and riding his motorcycle. He loved nature (with a special fondness for birds), planet Earth, the NY Yankees and Giants and above all, his immediate and extended family. Bruce had no children but adored his niece (Sophia) and nephew (Lucas), having spent much time with them, watching them grow with a keen and observant eye. Although he wasn’t religious, he had a very gentle, spiritual side. He valued his time alone, as was his nature, but had much to contribute to any sort of gathering. He will be deeply missed. Bruce is survived by his two brothers, Joseph E. and Robert C. (wife Sheryle) Bixler, his sister Martha M. Goodsill (husband Jeff), three nephews and two nieces, and nineteen cousins. He is also survived by his former wife, Diana. Bruce was predeceased by his parents and two brothers, William A. and Richard M. Bixler. Funeral Notice: A private graveside service for the family of Mr. Bruce Lee Bixler will be held at a later date. In lieu of flowers, donations can be made to the Nature Conservancy or the ASPCA in care of the Dwyer Funeral Home, 776 North Street, Pittsfield, MA 01201, in his memory. Donations CANNOT be made online, but may be made through the Dwyer Funeral Home.

Bruce Lee Bixler, 69, a native of Pittsfield and longtime resident of New York, passed away at his home on Sunday, August 30, 2020. Born on November 22, 1950 in Schenectady, NY, to Kay (Albright) and Robert E. Bixler, he moved to Pittsfield... View Obituary & Service Information

The family of Mr. Bruce Lee Bixler created this Life Tributes page to make it easy to share your memories.

Bruce Lee Bixler, 69, a native of Pittsfield and longtime resident...

Send flowers to the Bixler family.