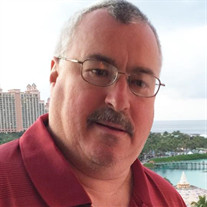 Mr. Carl J. DeLuce, 55, of Pittsfield, passed away on November 15, 2018 at Baystate Medical Center. Born in Pittsfield on October 9, 1963, the son of Josephine Corsani DeLuce and the late Carlo DeLuce, he was a 1981 graduate of Taconic High School. He received his Associates degree in Culinary Arts from Johnson & Wales University. Mr. DeLuce owned and operated the Hot Dog Ranch with partners Craig Benoit and Paul Markland, for the past 14 years. He had also been the Executive Chef at Cranwell Resort for 18 years. Carl had previously been a Sous Chef at the former Hilton Hotel, Executive Sous Chef at Canyon Ranch and also owned the South End Market where he ran a catering business, C & C Catering with close friend Barry Correia. Carl was an avid sports fan, cheering on all the New England teams. He was especially a Boston Celtics fan, Larry Bird being his all-time favorite player, and a New England Patriots fan. He had the opportunity this past year to fly to a game on the Patriots private jet. Carl believed in giving back to the community and had been a member of several organizations, including the Elks Lodge, the East Side Men’s Club, the Italian American Club and UNICO. His favorite times were spent with his family and his very close group of friends. Besides his mother, he is survived by his wife, the former Tracy Muzzy, whom he married on May 26, 1990 at St. Stephen’s Episcopal Church; his two daughters, Sydney DeLuce and Cassie DeLuce; a brother, E. John DeLuce and his wife Sandy and a sister, Yvonne Pannesco and her husband Gerald. Carl also leaves Rich Powell who had become another son to him. Funeral Notice: Funeral services for Mr. Carl J. DeLuce will be Tuesday, November 20, 2018 with at Liturgy of Christian Burial at 10 a.m. at St. Charles Church, celebrated by the Rev. A. Peter Gregory, Pastor Emeritus. Burial will be at a later date. In keeping with Carl’s wishes, there will be no formal calling hours, instead the family will host a time for friends to share memories and to come and go as they please at the Dwyer Funeral Home Monday, November 19, 2018 from 3 to 7 p.m. In lieu of flowers, donations can be made to the Berkshire County Jimmy Fund in care of the Dwyer Funeral Home, 776 North St., Pittsfield, MA 01201 in his memory. Please visit www.dwyerfuneral.com to leave condolences and remembrances.

Mr. Carl J. DeLuce, 55, of Pittsfield, passed away on November 15, 2018 at Baystate Medical Center. Born in Pittsfield on October 9, 1963, the son of Josephine Corsani DeLuce and the late Carlo DeLuce, he was a 1981 graduate of Taconic High... View Obituary & Service Information

The family of Mr. Carl J. DeLuce created this Life Tributes page to make it easy to share your memories.

Send flowers to the DeLuce family.