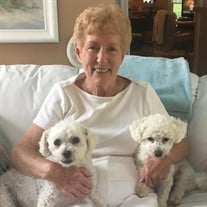 Mrs. Carolann Roman, 79, of Lanesborough, Massachusetts, entered into God’s eternal care on Saturday, February 8, 2020 after a tragic fall in her home. Born in Manhattan, New York, on January 18, 1941, she graduated from St. Peters High School for Girls. She earned an Associate Degree from Community College, Staten Island, and attended Brooklyn College. Carolann worked as a programmer for much of her career, trained by Chase Manhattan Bank and working for Sperry Rand Corporation. Then she wanted to explore the West and worked as a casino dealer at Harrah’s Lake Tahoe Hotel in Nevada. She later owner and operated, with her husband Michael, a bicycle shop called Biker’s America, which rented and sold bicycles and scooters in Tampa, Florida, where they owned a home and spent half the year. She had a passion for golf, as well as bowling, and did gardening for the local Shakespeare Theatre. She was also proud of her own garden, which she tended with great care. Carol was a lover of books and learning and spent many hours reading and at the library where she took several classes. Back at home, she hosted several competitive Scrabble games with her good friends. Carolann loved life and a good laugh and gave that appreciation to her many nieces and nephews, always helping them with painting their apartments, giving them her house so they could go skiing, wearing bunny rabbit ears on Easter Sunday, pretending to be Santa filling the stockings on Christmas Eve or letting a great niece and great nephew make up her face with all sorts of paint. Carolann had three siblings and numerous nieces, nephews, great nieces and great nephews. They were her brother John Meekins and sister-in-law Yvonne of Stephentown, New York, and their children Heather Mallory and children Lila and Dylan, Major Brian Meekins and wife Angela and their children Abaigael, Kiera and Conor, Tara Meekins and her partner Dan McPherson, and Andrew Meekins and wife Kelly and their children Maple, Hazel and John Hawthorne; her sister Evelyn Hadad and her husband Herbert of Pocantico Hills, New York, and their children Edward and Adlin Hadad and their children Evan and Willow, Charles and Alice Hadad and their child Maya, Sara Hadad/Le Brusq and husband Herve Le Brusq and their child Damian Jean; and her sister Jo-Ellen Nicholson of Gig Harbor, Washington and her husband Denis recently deceased and their son Bradley Nicholson and his wife Susan. Carol was predeceased by her loving husband of 25 years Michael, her niece Veronica Nicholson, parents Edward Michael Mulhearn and Catherine Gallagher Meekins, aunt Nellie Gallagher and grandmother Evelyn Gallagher. Also among her survivors are her two beloved dogs Juliet and Toby. She got and gave so much comfort and love from these two little Bichons. Fortunately, she had Bob Burns of the Pondviews Country Kennels to take loving care of them whenever she visited relatives. Carol had no ordinary life. It was a life well-lived and well-loved and a life that will be sorely missed, especially at family gatherings. Funeral Notice: Funeral services for Mrs. Carolann Roman will be held this coming spring, a notice of which will be publicized at a later date. In lieu of flowers, donations can be made in her memory to Immaculate Conception Church, P.O. Box 218, New Lebanon, New York 12125 where Carolann lit many a candle in its grotto for her whole family, in care of the Dwyer Funeral Home, 776 North Street, Pittsfield, MA 01201. Donations CANNOT be made online, but may be made through the Dwyer Funeral Home.

The family of Ms. Carolann Roman created this Life Tributes page to make it easy to share your memories.

Send flowers to the Roman family.