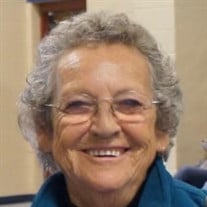 Carolyn E. Downer, 80, of Lanesboro passed away on Friday, January 29, 2021 following a courageous battle with lung cancer. Carol was born in Utica, New York on January 27,1941 to Clesson and Florence (Baird) Eurich. As a young girl the family moved to Waterbury, Vermont where she graduated from Waterbury High in 1960. She married her late husband, Phillip (Pete) Downer on June 17, 1961 in Waterbury, Vermont and they settled in the St Johnsbury, Vermont area. In 1969, following a job transfer, they moved to Lenox, Massachusetts where they raised their three boys. They returned to Vermont in 1983. The year after the death of her husband on February 6,1999, Carol moved back to Massachusetts to be nearer to her children and grandchildren. She worked at Friendly's in Lenox for 10 years when the boys were young. She was a homemaker that loved spending time with her children and grandchildren. She could be found at all the grandchildren's sporting events. She was an active member of the Dalton American Legion Post 155 Auxiliary. Carol enjoyed being active snow shoeing, bowling, walking, and dancing, but her passion in later years was golfing. She had a hole in one while a member of the Copley Country Club in Morrisville, Vermont and was Senior Women's Club champion at the Skyline County Club. Carol is survived by her two sons Kevin (Paula) Downer of Lenox and Daniel (Sue) Downer of Dalton. She leaves her grandchildren Hollie, Jamie, Michael and Jessie Downer and siblings Kevin (Sheila) Eurich, Susan (Dennis) MCDonald and Steven (Elaine) Eurich as well as many nieces and nephews. She also leaves her longtime companion, Ernest Dechaine, with whom she made her home over the last 13 years and his children Danielle and Matthew and their families. As well as her husband, Carol was predeceased by her parents, her son Michael Downer (1992), grandson Peter Downer (1999) and her sisters Nancy Demas and Joanne Griffith. Funeral Notice: There will be no formal calling hours. A celebration of life will be held at a later date, with a burial following in Johnson, Vermont. In lieu of flowers, donations can be made in Carol's memory to Soldier On or the American Cancer Society in care of the Dwyer Funeral Home, 776 North Street, Pittsfield, MA 01201. Donations CANNOT be made online, but may be made through the Dwyer Funeral Home.

Carolyn E. Downer, 80, of Lanesboro passed away on Friday, January 29, 2021 following a courageous battle with lung cancer. Carol was born in Utica, New York on January 27,1941 to Clesson and Florence (Baird) Eurich. As a young girl the family... View Obituary & Service Information

The family of Mrs. Carolyn E. Downer created this Life Tributes page to make it easy to share your memories.

Carolyn E. Downer, 80, of Lanesboro passed away on Friday, January...

Send flowers to the Downer family.