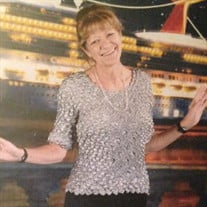 Charleen Marie Smith-O’Brien, 66, passed away on Saturday, January 11, 2020, at her home in Great Barrington. Previously, she had been a longtime resident of Lee. Born in Pittsfield on September 29, 1953, the daughter of Patricia Smith and the late Charles Smith Sr., former Mayor of Pittsfield, she was a graduate of Taconic High School. She later earned her Nursing degree from Berkshire Community College. Char worked for many years as a Registered Nurse. She worked at Berkshire Medical Center for several years and later as Director of Nursing for Apple Healthcare in Connecticut. Growing up, she was active in her father’s political campaigns and was a candidate herself for Ward 5 City Council. Besides her mother of Pittsfield, she leaves her two devoted sons; Sean O’Brien of Great Barrington and Christopher (Allison) of Rochester, NY and her grandson Tarl, who was the darling of her heart. She also leaves behind her siblings, Charles Smith Jr. (Mary Louise) of Pittsfield, Christopher Smith (Dale Scalise-Smith) of Hinsdale, Mary Beth Eckert (John) of Pittsfield , Carlton Smith (Sally) of Lanesboro, and Kazuo Smith of Pittsfield, Christine Robinson of Springfield, Pearl Pratt of Saint Petersburg, FL, and many beloved, nieces, nephews and cousins. Her longtime friends Katie McTeigue and Jane Beaudoin were also a tremendous support to Char. She is predeceased by her first husband and father to her sons, John O’Brien, who passed away in 1991, as well as her sister Pamela in 2015. Funeral Notice: A Liturgy of Christian Burial for Charleen Marie Smith-O’Brien will be on Wednesday, January 15, 2020 at 12 Noon at St. Charles Church celebrated by the Rev. A. Peter Gregory, Pastor Emeritus. At Charleen’s request, there will be no calling hours and burial will be at a later date. In lieu of flowers, donations can be made to the Juvenile Diabetes Research Foundation in care of the Dwyer Funeral Home, 776 North St., Pittsfield, MA 01201 in her memory.

Charleen Marie Smith-O&#8217;Brien, 66, passed away on Saturday, January 11, 2020, at her home in Great Barrington. Previously, she had been a longtime resident of Lee. Born in Pittsfield on September 29, 1953, the daughter of Patricia... View Obituary & Service Information

The family of Charleen Marie Smith-O'Brien created this Life Tributes page to make it easy to share your memories.

Send flowers to the Smith-O'Brien family.