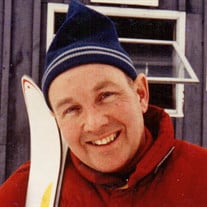 Mr. Charles Caldwell, 88, of Pittsfield, passed away on Friday, April 26, 2019. Born in Weirton, WV, the son of Donald and Ethel Long Caldwell, he was a 1948 graduate of Weirton High School. He earned a bachelor’s degree in engineering from the Franciscan University of Steubenville in Ohio. Mr. Caldwell was a US Army veteran during the Korean War. After leaving the military, he was an active member of the Army’s Military Auxiliary Radio System (MARS). He worked for General Electric in Pittsfield as an electrical engineer for over 30 years, retiring in 1991. Mr. Caldwell was a member of the GE Quarter Century Club and Pensioners, a member of the Lenox Sportsman’s Club, and was a Boy Scout Leader. He enjoyed skiing and was a member of the Brodie Mountain Ski Patrol for 38 years, several as Patrol Director. He later spent nine years as a member of the Bousquet Ski Patrol. He is survived by his wife, Doloris Caldwell (née Ewaskey), who he married on August 25, 1950. He also leaves his four children, Audrey Cullen (m. Thomas Cullen), Linda Clifford (m. Daniel Clifford), Dennis Caldwell, and Laurie Little (m. Timothy Little); seven grandchildren; and one great grandson. He was predeceased by a son, Roger Caldwell (m. M. Catherine Chavez) who passed away in 2009. Funeral Notice: Funeral services for Mr. Charles Caldwell will be Wednesday, May 1, 2019 at noon at the Dwyer Funeral Home. The Rev. William Furey will officiate. Burial will follow in Pittsfield Cemetery. There will be an hour of visitation prior to the service, from 11 a.m. until noon. The family requests no flowers, in their stead donations can be made in his memory to the Shriners Hospital for Children, in care of the Dwyer Funeral Home, 776 North St., Pittsfield, MA 01201.

Mr. Charles Caldwell, 88, of Pittsfield, passed away on Friday, April 26, 2019. Born in Weirton, WV, the son of Donald and Ethel Long Caldwell, he was a 1948 graduate of Weirton High School. He earned a bachelor&#8217;s degree in engineering... View Obituary & Service Information

The family of Mr. Charles Caldwell created this Life Tributes page to make it easy to share your memories.

Mr. Charles Caldwell, 88, of Pittsfield, passed away on Friday,...

Send flowers to the Caldwell family.