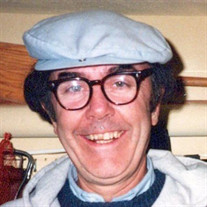 Mr. Charles D. Gilson, Jr, 88, a lifelong resident of Pittsfield, passed away peacefully on Holy Saturday, April 16, 2022, after a seven month battle with cancer. Born on August 15, 1933, the son of the late Charles D. and Freda Hesse Gilson, he graduated from St. Joseph High School with the class of 1951. He later earned his degree in History and Philosophy from St. Michael’s College, where he was a member of the Edmundite Order. Chuck then graduated from Boston College, where he received his master’s degree, also in History and Philosophy. Chuck was a proud U.S. Army Veteran who served his country both in Germany and later at Fort Bragg, NC, where he was stationed in 1962. Chuck was an outstanding, not to mention popular, instructor of advanced Placement and Honors European History classes at Pittsfield High School, where he taught for 35 years. Following his retirement in 1995, Chuck became a “Snowbird,” spending winters at his Florida condo and his summers at home in the Berkshires. He enjoyed visiting city nursing homes as a Eucharist Minister for St. Joseph’s Parish. Chuck was a Renaissance Man who enjoyed the Metropolitan Opera, Broadway Theaters, Tanglewood, domestic and foreign travel, the Old Masters and Modern Art, all genres of literature, church architecture, puzzles, and most importantly, postcards. He is survived by his longtime friend and companion, Barbara Bell, his sister, Mary Gilson Spina, as well as numerous nieces, nephews, grandnieces and grandnephews, and one great grandnephew. Besides his parents, Chuck was predeceased by his brothers, Richard, Leo and Christopher, his brother-in-law, Peter Spina, and his nephew, Jack Gilson. Funeral Notice: Funeral services for Mr. Charles D. Gilson, Jr., will be Friday, April 29, 2022, with a Liturgy of Christian Burial at 12:30 pm at Sacred Heart Church, celebrated by the Rev. A Peter Gregory, Pastor Emeritus of St. Charles Church. There will be an hour of visitation prior to the service from 11 am to 12 noon at the Dwyer-Wellington Funeral Home, 220 East Street, Pittsfield MA 01201. In lieu of flowers, donations in Charles’ memory can be made to HospiceCare in the Berkshires, 877 South Street, Pittsfield MA 01201.

The family of Mr. Charles D. Gilson, Jr. created this Life Tributes page to make it easy to share your memories.

Send flowers to the Gilson, family.