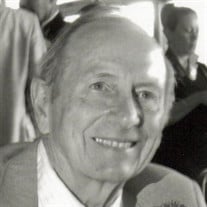 Mr. Charles Wasnewsky, 90, of Pittsfield, passed away on Sunday, October 17, 2021. Born in Milford, MA, on March 20, 1931, the son of the late Samuel and Clementina Shenkowski Wasnewsky, he graduated from Medway High School and then earned his associate’s degree from Wentworth Polytech Institute. Charles was a Korean War veteran. He enlisted in the United States Army in 1952 and was stationed at Aberdeen Proving Ground in Maryland where proudly served his country as a Sergeant until 1954. Charles’ active service was followed by 8 years in the reserves. After his time in the military, Charles was employed by General Electric. There he dedicated 35 years of service as a foreman and manufacturing engineer until his retirement in 1989. Among many things, Charles loved spending time with his family. He enjoyed woodworking, gardening, and trips to the ocean (especially when vacationing in Cape Cod). Charles was also a passionate Red Sox fan. Charles was predeceased by his beloved wife of nearly 64 years, the former Beryl Winters, whom he married on August 30, 1952. Beryl passed away on March 24, 2016. He was also predeceased by his son, Michael Wasnewskey, who passed on October 8, 1990. Charles is survived by his children, Linda Duffy (Rich), Susan Dumouchel (Phil), Mark Wasnewsky (Joyce Goddeau) Judith Kelly (Brian), and Lisa Wasnewsky. He leaves behind 10 grandchildren, Erin, Nicole, Aimee, Christine, Luke, Shannon, Matthew, Cory, Giovanni, Taylor, and Brian, as well as ten greatgrandchildren. Funeral Notice: Funeral services for Mr. Charles Wasnewsky will be Thursday, October 21, 2021 at 12 noon at the Dwyer Funeral Home, 776 North Street, Pittsfield MA 01201, with the Rev. A. Peter Gregory, Pastor Emeritus of St. Charles Church, officiating. Burial with full military honors will follow at St. Joseph Cemetery. There will be an hour of visitation prior to the service from 11 a.m. until 12 noon. To best ensure everybody’s health, due to the recent rise in Covid cases, all who attend these services will be required to wear face masks.

Mr. Charles Wasnewsky, 90, of Pittsfield, passed away on Sunday, October 17, 2021. Born in Milford, MA, on March 20, 1931, the son of the late Samuel and Clementina Shenkowski Wasnewsky, he graduated from Medway High School and then earned his... View Obituary & Service Information

The family of Mr. Charles R. Wasnewsky created this Life Tributes page to make it easy to share your memories.

Mr. Charles Wasnewsky, 90, of Pittsfield, passed away on Sunday,...

Send flowers to the Wasnewsky family.