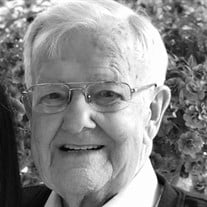 Charles Cathrall Wyand, Sr. of Dalton peacefully passed away at Berkshire Medical Center, on January 10, 2020 at the age of 90, with many of his beloved family by his side. Charles, known to some as Chuck and others as Charlie, was born in Pittsfield on May 25, 1929, to the late Walter S. and Annie K. Brown Wyand. He graduated from Pittsfield High School in 1947 and began his apprenticeship as a plumber before entering the United States Army during the Korean War. He eventually became a master sergeant, serving in Germany. After being discharged, he finished his plumbing apprenticeship, and ultimately became a master plumber. He was a member of the Plumbers and Pipefitters Local 104, for several years teaching apprentice plumbers, and in the course of time worked for Sheldon, Dick March, Crane, Holyoke Valve and Hydrant, Pittsfield Pipers, and Cardillo Plumbing, from which he retired in 1993. Following his retirement, he continued using his skills as a volunteer for Habitat for Humanity. On November 25, 1951, Charles married Nancy Helen Coleman, his wife of 68 years, residing first in Pittsfield, then moving to Dalton where they raised their family of five children and lived out the rest of their life together. Charles attended First Baptist Church, Pittsfield for all of his 90 years, where he was an active member, serving on the Board of Deacons, the Board of Christian Education as Chairman, the Missions Board, as a Sunday school teacher, and on any other boards or committees needing his able assistance. He was a Cub Scout leader at the church for several years. For decades he was a part of the Tuesday night work group, repairing and beautifying the church building. Charles thoroughly lived life. He enjoyed camping with his family while his children were growing up. He loved canoeing and walking with Nancy, visiting Cape Cod and Acadia, Nova Scotia, and Myrtle Beach, and traveling to see his children, grandchildren, and great grandchildren, even taking a trip to England when he was 88 years old. In his younger days he served as a member of the Wahconah R.H.S. booster club and played in the Slow Pitch Softball League. Charles is predeceased by his parents, his brothers Walter S. Wyand, Jr. and Herbert Wyand, Sr., and his sisters Mary Rankin and Ruth Wyand. Besides his wife, he is survived by his sister Gertrude Garrity of Lenox, MA and his children and their spouses: Charles C. Wyand, Jr. (Susan) of East Lyme, CT, RoseAnne Holladay (Breck) of New Harbor, ME, Carol Stone (Glenn) of Sagamore Beach, MA, Laura Laflamme (Richard) of Georgetown, MA, and Robert Wyand (Susan) of Claremont, NH. He is also survived by 16 adoring grandchildren and 20 great grandchildren. His wife and family would like to express their deep appreciation to the dedicated staff at Berkshire Medical Center, who lovingly labored and cared for Charles during his last days SERVICE NOTICE- A memorial service is planned at First Baptist Church in Pittsfield on Saturday, January 25, 2020 at 2:30. There will be calling hours in the sanctuary of the church for an hour preceding the service. Burial will be private. In lieu of flowers, memorial donations can be made to Habitat for Humanity or to The First Baptist Church, in care of the DWYER-WELLINGTON FUNERAL HOME, 525 Main St., Dalton, MA 01226. Please visit www.dwyerfuneral.com to leave condolences and remembrances to his family.

Charles Cathrall Wyand, Sr. of Dalton peacefully passed away at Berkshire Medical Center, on January 10, 2020 at the age of 90, with many of his beloved family by his side. Charles, known to some as Chuck and others as Charlie, was born in... View Obituary & Service Information

The family of Mr. Charles Cathrall Wyand, Sr. created this Life Tributes page to make it easy to share your memories.

Send flowers to the Wyand, family.