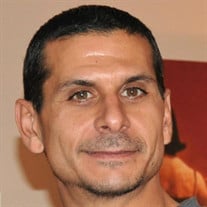 It is with tremendous sadness and a heavy heart that we announce the untimely and sudden passing of Christopher Michael Herrick, 48, of Port Arthur, Texas, a beloved father, son, brother, uncle, cousin, and friend to many. Christopher died of injuries sustained in an automobile accident on Sept. 10th. Christopher was born November 29, 1972, in Pittsfield, Mass., the son of Michael R. Herrick, Sr. and Mary L. (Lucido) Herrick. He is survived by his parents; his daughter, Alecia Nicole Herrick of Dalton; and a grandson, Grayson Michael Laraway, also of Dalton. Chris cherished his daughter Alecia and never had as much joy in his eyes as when he was with her. He also leaves four siblings, Michael R. Herrick, Jr. of Holiday, Fla. and his wife, Michelle; Matthew M. Herrick of Bethesda, Md. and his wife, Cassie Moore; Lisa M. (Herrick) Lovell of Palmer, Mass. and her husband, Matthew; and Elizabeth M. (Herrick) Boschetti of Huntington, Mass. and her husband, Dominic. He also leaves many cousins, nieces and nephews, and countless friends, among them his former wife, Audrey (Bacon) Herrick of Dalton. Christopher was a graduate of Pittsfield high schools. He grew up on Merrill Road in Pittsfield with his loving family and a tight community of neighbors. He loved the outdoors, camping, fishing with his family, and fixing and tinkering with machines. From an early age he could fix almost anything. He was an exceptional athlete as a youth, wowing crowds at Little League games with his home run prowess and catching skills. As a young adult, he worked for several years at Kelly’s Diner in Pittsfield, as well as County Concrete and Unistress. He moved to Florida to pursue a career in the trades with his brother, working in construction and masonry. When hurricanes Rita and Katrina struck the Gulf Coast in 2005, Christopher worked along the coast to assist with the cleanup and eventually settled in Texas to run his own business, Clean Cut Palm and Tree Trimming. He worked as a professional tree trimmer and landscaper for the past 15 years until his tragic passing. Christopher had an infectious laugh and wonderful sense of humor that he peppered with rapid comebacks and famous one-liners. He had a big heart and was always willing to lend a hand. Living on the Gulf Coast, he helped the Cajun Navy rescue fellow Texans stranded in the extreme flooding events of 2017. He built things for family members, helped friends and family move, and was a fierce protector of those close to him. Sometimes, simply mentioning that you were a “friend of Chris” would get you out of a hairy situation. Everyone who knew Chris has a story about something he did to help them. Funeral Notice: Funeral services for Christopher will be private. Arrangements are being handled by Dwyer Funeral Home of Pittsfield. In lieu of flowers or donations, the family asks that you do a kind deed for someone in need.

It is with tremendous sadness and a heavy heart that we announce the untimely and sudden passing of Christopher Michael Herrick, 48, of Port Arthur, Texas, a beloved father, son, brother, uncle, cousin, and friend to many. Christopher died of... View Obituary & Service Information

The family of Mr. Christopher Michael Herrick created this Life Tributes page to make it easy to share your memories.

It is with tremendous sadness and a heavy heart that we announce...

Send flowers to the Herrick family.