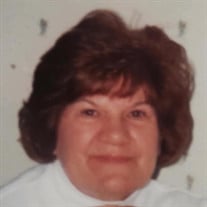 Mrs. Clementine J. Brothers, 75, of Pittsfield, passed away after a short battle with cancer, on Wednesday, April 15, 2020. Born in Pittsfield, MA on November 30, 1944, the daughter of the late Frank and Frances Blaszkiewicz Krol, she was a graduate of Pittsfield High School. For much of her career, Clementine worked as a City Clerk at Pittsfield City Hall. Clementine enjoyed spending time with her family. From knitting items for the great grandchildren to having a Christmas toast with her nieces, nephews, and any other family member that would appreciate a fine brandy, it was all about family. She will miss her golf league at The GEAA (yes, she walked the course) and especially coffee and lunch with the girls. Clementine was a member of The American Legion, volunteered at the Northampton VA Medical Center, Local Voting Polls, and was a former member of “The Red Hat Society”. She was always there for any family or friend, and you were certain to get a birthday or anniversary card from her. Clementine was predeceased by her beloved husband (who sang to her whenever he was near a Karaoke machine) Lawrence E Brothers Jr., whom she married on January 31, 2004, and Son-in-Law Michael Casella. Besides her children Joan Dassatt, Michelle Dietlin-Casella, Michael Dietlin, Clementine is survived by her 3 brothers, Franklin, John, and Melchior as well as her 2 sisters, Rosalie and Dianne. She leaves behind her Son-in-Law Gary Dassatt, Gary Jr., Brittany and Aaron and their son Wyatt, Eric and Natasia and their son Rylan, David Masdea, Mathew Dietlin, and Ryan Dietlin. Funeral Notice: Funeral services for Mrs. Clementine J. Brothers will be held at a later date. In lieu of flowers, donations can be made to American Legion Post 155 Dalton MA or Northampton VA Medical Center in care of the Dwyer Funeral Home, 776 North St., Pittsfield, MA 01201 in her memory. Donations CANNOT be made online, but may be made through the Dwyer Funeral Home.

Mrs. Clementine J. Brothers, 75, of Pittsfield, passed away after a short battle with cancer, on Wednesday, April 15, 2020. Born in Pittsfield, MA on November 30, 1944, the daughter of the late Frank and Frances Blaszkiewicz Krol, she was a... View Obituary & Service Information

The family of Mrs. Clementine "Clem" Brothers created this Life Tributes page to make it easy to share your memories.

Mrs. Clementine J. Brothers, 75, of Pittsfield, passed away after...

Send flowers to the Brothers family.