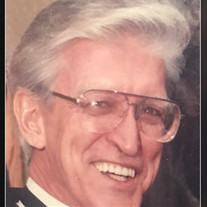 Dr. Clifford E. Madden of Lee, Ma and Bradenton, Fla passed away peacefully at home on October 9, 2021, just three weeks shy of his 90th birthday, with his children by his side. Born in Pittsfield on October 31, 1931, he was the son of the late Francis and Albertine (Croteau) Madden. Cliff was predeceased by his only brother Richard and the love of his life Elaine Frieri Madden to whom he was married 59 years before her passing in 2017. He graduated from St. Joseph’s High School in 1949, shortly after he enlisted in the U.S Army and served his Country until 1954. While in the service he earned four service medals: Army of Occupation Medal (Japan), United Nations, Korean, and National Defense Service Medals. Upon return he married in 1958, then graduated from Palmer Chiropractic in 1960 and opened his office in Pittsfield. He cared so much for his patients and practiced for the next forty some years with Elaine by his side as office manager. Cliff enjoyed playing cards, horses and horse racing, watching football and going out to dinner. He was humble, easy going, witty and optimistic. Always smiling and wanting to put smiles on those around him. He was the utmost loving family man who lived to see his wife and family happy. He leaves his son; Dr. Keith Madden and his wife Debbie of South Windsor, CT. Two daughters; Darlene Esposito and Kim Madden of Pittsfield. He also leaves his eight adoring grandchildren; Michael and Anthony Esposito, Zachary Bump, Kaleigh McLellan, Brielle Rose, Shannon Netzer, Sam and Angela Madden. His three great granddaughters; Cecelia Esposito, Reagan and Harlow Rose, as well as many nieces and nephews. Funeral Notice: Funeral services for Dr. Clifford E. Madden will be Monday, October 18, 2021, with a Liturgy of Christian Burial at 12:30 p.m. at St. Mark’s Church, celebrated by the Rev. Christopher Fedoryshyn, Pastor. Full military honors will be rendered. Calling hours will be Sunday, October 17, 2021, from 12 noon to 3 pm at the Dwyer-Wellington Funeral Home, 220 East Street, Pittsfield MA 01201.

Dr. Clifford E. Madden of Lee, Ma and Bradenton, Fla passed away peacefully at home on October 9, 2021, just three weeks shy of his 90th birthday, with his children by his side. Born in Pittsfield on October 31, 1931, he was the son of the... View Obituary & Service Information

The family of Dr. Clifford E. Madden created this Life Tributes page to make it easy to share your memories.

Send flowers to the Madden family.