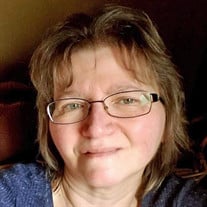 Ms. Cynthia “Cindy” Mills, 58, of Pittsfield, passed away on Wednesday, May 1, 2019. Born in Framingham, MA, on February 9, 1961 the daughter of Irving and Sarah E. Brazee Mills, she attended Lee Schools. She later graduated from Berkshire Community College with her LPN degree. Cindy worked for various companies throughout her career in nursing. Cindy was an avid pool player. While she played in many different pool leagues in Berkshire County, she was best known for being a “pool shark” for over 20 years in the American Pool Player’s Association. Her talent could be best seen while she was playing under pressure, as she would always pull through every sudden death match, notably in the Las Vegas tournaments. Cindy was extremely easy-going in all aspects of her life, except when it came to food, where she was labeled by many as “the world’s pickiest eater.” She had a heart of gold and would, without hesitation, give the shirt off her back whenever the need arose. She is survived her sons; Craig R. Mills and Brad A. Lehmann; her daughter, Crystal M. Lehmann; as well as many brothers and sisters and several nieces and nephews. While Cindy adored her adopted family, one of her biggest blessings was being found by both her biological brothers, Kevin L. Brazee and Richard A. Scutt. Cindy was predeceased by her parents. Cindy’s family would especially like to extend their gratitude to Michele Zink Blaney, a dear friend who selflessly opened her home and heart in order to ensure that Cindy live out her final days in peace and comfort. Funeral Notice: A celebratory memorial will be held on Saturday, May 11 from 12pm-2pm at the GEAA, 303 Crane Avenue, Pittsfield, MA 01201. In lieu of flowers, donations can be made to Dwyer Funeral Home, 776 North St., Pittsfield, MA 01201 in her memory. Donations CANNOT be made online, but may be made through the Dwyer Funeral Home

The family of Ms. Cynthia M. Mills created this Life Tributes page to make it easy to share your memories.

Send flowers to the Mills family.