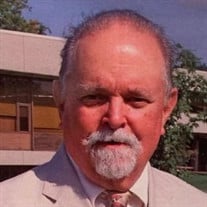 On the morning of January 4, 2021 Daniel C. Dillon succumbed to the effects of Covid 19 at Berkshire Medical Center. Born June 14, 1941, he was the son of the late Robert and Madeline Dillon of Pittsfield. He is survived by his wife Linda (Marauszwski) Dillon, two sons, Christopher and Brendan Dillon, both of Pittsfield, a daughter Tracie (Dillon) Dzurnak and her husband Mark of Torrington, CT, two granddaughters, Emily Rose and Erin Rachel Dillon, along with brothers, Robert and Thomas Dillon and two sisters, Connie (Dillon) Yannone of Pittsfield and Betty Ann (Dillon) Powell of Florida plus a host of nieces, nephews and cousins Dan was Class of 1959 at St. Joseph High School and went on to graduate from Berkshire Community College in 1963. Following that he served two years in the US Army. Upon returning he enrolled in the General Electric Apprentice Program and became a draftsman. He worked at GE until 1991. During his career at GE Dan spent time as union president of Local 140 of the International Federation of Professional and Technical Engineers and was President of the Northeast Council of this organization as well. His local community involvement was prodigious. In 1977 Dan was elected to the city council and served 3 terms. Later he went on to serve as President of Berkshire United Way for 12 years and was given the Francis X Doyle Award in 2005 for community service. For thirteen years he coproduced and was master of ceremonies for the local Cerebral Palsy Telethon and was Vice President of both the Irish American Committee and The Irish Sister City Committee for many years. He also served on the Pittsfield Human Services Commission and Success by Six Steering Committee. Following his retirement from Berkshire United Way, not one to sit still, he took reigns as Relationship Director for Greylock Federal Credit Union and became involved and instrumental in reviving the Berkshire Community College Alumni Association. Further, he was, until the time of his passing, on the Board of the Berkshire Community College Foundation and served on the development committee as well. Along with the Francis X Doyle Award Dan received an Annual Top Ten Alumni Award from St. Joseph High School. In 2005, in recognition of his unswerving service to the community, Berkshire United Way presented him the Helping Hands, Caring Heart Award, which was then renamed in his honor, The Daniel C. Dillon Helping Hands, Caring Hearts Award. Dan was humble and unassuming, a true friend to all, he loved his city and its many varied people. He liked a good laugh, a serious conversation, filling the community with holiday cheer as Santa, being with friends on a golf course in either the Berkshires or Vero Beach, a pint of Guinness, and oh my, did he love his Wolftones! Dan, Poppy, Danny, Dad, Mr. Dillon will be missed by loved ones, friends and the community. Funeral Notice: Funeral services for Mr. Daniel C. Dillon will be Friday, January 22, 2021, with a Liturgy of Christian Burial at 10 a.m. at St. Mark’s Church, celebrated the Rev. Christopher Fedoryshyn, Pastor. To view a live webcast of the service, please visit http://www.dwyerfuneral.com/obituaries/permalink/9791688/LTWebcast Burial will follow at St. Joseph Cemetery. Calling hours at St. Mark’s Church will be Thursday, January 21, 2021 from 4 p.m. to 7 p.m.. In lieu of flowers, donations can be made to Berkshire United Way, The Christian Center, PCTV, or the The Eagle Santa Fund, in his memory, in care of the Dwyer Funeral Home, 776 North Street, Pittsfield, MA 01201.

On the morning of January 4, 2021 Daniel C. Dillon succumbed to the effects of Covid 19 at Berkshire Medical Center. Born June 14, 1941, he was the son of the late Robert and Madeline Dillon of Pittsfield. He is survived by his wife Linda (Marauszwski)... View Obituary & Service Information

The family of Mr. Daniel C. Dillon created this Life Tributes page to make it easy to share your memories.

Send flowers to the Dillon family.