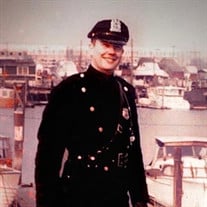 Mr. Darwin Norman Danielsen Jr., 84, of West Lebanon, NY, passed away at home on Tuesday, March 3, 2020. Born on March 21, 1935, the son of the late Darwin and Alice Swenson Danielsen, he graduated from Fort Hamilton High School in 1953. Darwin enlisted in the United States Navy Reserves where he proudly served his country. He worked as a member of the Highway Patrol Division of the New York City Police Department, where he continued serving others for 20 dedicated years. Darwin was predeceased by his beloved wife, the former Anita Arveseth, whom he married on September 8, 1956. He is survived by his two sons, Scott Danielsen and his wife, Virginia Kittler Danielsen, and Bryan Danielsen and his wife, Denise Dey Danielsen. He leaves behind his four grandchildren, Rachel Rose, Jason Danielsen, Craig Danielsen and Jennifer King, as well as three great grandchildren, Brynden Danielsen, Julian King, and Erin Tollerton. Funeral Notice: There will be no formal funeral services for Mr. Darwin N. Danielsen. In lieu of flowers, donations can be made to St. Jude Children’s Research Hospital in care of the Dwyer Funeral Home, 776 North St., Pittsfield, MA 01201 in his memory. Donations CANNOT be made online, but may be made through the Dwyer Funeral Home.

The family of Mr. Darwin N. Danielsen Jr. created this Life Tributes page to make it easy to share your memories.

Send flowers to the Danielsen family.