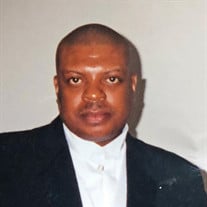 Mr. David T. Beckett, 56, of Pittsfield, passed away on Tuesday, July 16, 2019. Born in Trenton, NJ, on May 6, 1963 the son of the late Percell Beckett II and Hattie Mae Leverett, he graduated from Trenton Central High School. David was self-employed and worked as a painter for most of his career. In addition to painting, he also worked as a home healthcare aide. When David wasn’t working, he loved being outdoors. It was there he was able to enjoy some of his favorite pastimes, such as fishing and taking long walks with his beloved wife, Rebecca. David also took an interest in music. He could always be found singing to Rebecca, one of the many ways he kept her smiling. Additionally, David was a big fan of boxing. Besides his wife, Rebecca Merwin-Beckett, whom he married on July 27, 2018, David is survived by his mother; and his two children, David Beckett Jr., and Peala McGee. He is also survived by his sisters, Ramona Beckett Jeremiah, Geraldine Beckett, Francine Beckett Guerra, Priscilla Beckett, and Lisa Beckett; as well as his brothers, Percell Beckett III, Brian McWhorter, and James McWhorter. David also leaves behind six adored grandchildren, aunts and uncles, a host of nieces and nephews, cousins and large group of cherished friends. David was predeceased by his father, Percell Beckett II. Funeral Notice: Funeral services for Mr. David Beckett will be Wednesday, July 31, 2019 at 3:00pm at the Dwyer Funeral Home, 776 North St. Pittsfield, MA, with the Rev. William Furey officiating. In lieu of flowers, donations can be made to Dwyer Funeral Home in his memory. Donations CANNOT be made online but may be made through the Dwyer Funeral Home.

Mr. David T. Beckett, 56, of Pittsfield, passed away on Tuesday, July 16, 2019. Born in Trenton, NJ, on May 6, 1963 the son of the late Percell Beckett II and Hattie Mae Leverett, he graduated from Trenton Central High School. David was self-employed... View Obituary & Service Information

The family of Mr. David T. Beckett created this Life Tributes page to make it easy to share your memories.

Send flowers to the Beckett family.