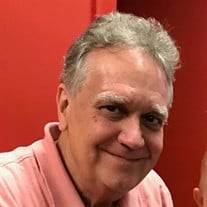 David Anthony Crea, 69, passed away unexpectedly at his home on February 16th, 2022. Born on April 25, 1952 and raised in Pittsfield, MA, Dave graduated from UMass Amherst and settled in the Boston area working for many years at the state house in Boston. Being involved in local politics was something very near and dear to his heart. Dave met his ex-spouse, Elizabeth Crea, with whom he raised five loving children, and spent many happy years in Framingham, eventually retiring from Digital Equipment Corporation. Dave had a passion for sports, and coached many generations of Framingham children on local soccer teams. He fondly remembered these years as his most fulfilling. Dave will be remembered as a loving and devoted father and grandfather, who thought of others first and always had a ready smile on his face. He is the son of Ann Bohlman, Anthony J Crea and Robert Bohlman who pre-decease him. He is survived by his children: Nicholas Patrick Crea, his wife Raquel and granddaughter Mackenzie, Nathaniel Anthony Crea, his wife Erica and grandsons Grayson and Camden; Andrew Robert Crea, his wife Libby and grandson Cooper; his daughter Amanda Cain Crea and her partner JC Andrades; his son Alexander Joseph Crea and his wife Christine. David is also survived by his sisters Rosemarie Phelps and husband Michael, and Tracy Ann Bohlman. His brothers Robert S. Bohlman, and Anthony J Crea Jr and wife Diana, and his stepmother J. Brenda Crea, all of Pittsfield. David is also survived by his nephews Kevin Phelps and wife Courtney, River Bohlman and his wife Carolina, Dylan and Anthony J Crea III and his nieces Carolyn Bohlman and Megan Correia and husband Ben. Family and friends will honor and remember David's life by gathering for visiting hours in the McCarthy, McKinney and Lawler Funeral Home, 11 Lincoln St. Framingham on Thursday, February 24th from 4-7PM. A funeral Mass and celebration of life will be held on April 23, 2022, with a Liturgy of Christian Burial at 9:30 am at Sacred Heart Church, celebrated by the Rev. A Peter Gregory, Pastor Emeritus of St. Charles Church. Burial will follow at St. Joseph Cemetery In lieu of flowers please make donations in David's name to Framingham United Soccer Club, 1257 Worcester Rd., #135, Framingham Massachusetts 01701.

David Anthony Crea, 69, passed away unexpectedly at his home on February 16th, 2022. Born on April 25, 1952 and raised in Pittsfield, MA, Dave graduated from UMass Amherst and settled in the Boston area working for many years at the state house... View Obituary & Service Information

The family of Mr. David A. Crea created this Life Tributes page to make it easy to share your memories.

David Anthony Crea, 69, passed away unexpectedly at his home...

Send flowers to the Crea family.