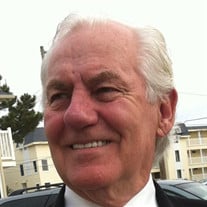 Dr. David B. Jordan, Ph.D., 84, a resident and former Councilman of Edgewater, NJ, passed away on Thursday, January 30, 2020, surrounded by his loving family. Born in Pittsfield, MA, the son of the late Willard G. and Winifred C. (Bartlett) Jordan, he attended Springfield College, then earned his PhD in exercise physiology from the University of Oregon. He was a lifetime fellow of the American College of Sports Medicine. David was a Korean War veteran. He enlisted in the United States Army in 1954, where he proudly served his country until 1956. He worked most of his career as a professor for the City University of New York. David was always service oriented and civic minded. He served as Council Liaison to the Edgewater Fire Department, the Board of Health, and the Parks Department. David was also a dedicated Trustee of the Edgewater Colony. He was an incredible athlete; a baseball player who was recruited by the Brooklyn Dodgers and the Red Sox, competed nationally at handball and racquetball into his 70s, a ski racer and instructor, and a competitor in any game that looked like fun. He shared his love and technical understanding of sports with aspiring athletes, and anyone who wanted to try their best. Several of his students went on to train professional athletes. Outside of athletics he pioneered early advancements in cardiac rehabilitative care by prescribing strength training and exercise to heart attack patients, with numerous methods that were adopted as the standard of care today. David leaves behind his companion Susan Candee, his children, Eric Jordan (Andrea), Tenley Jordan Cederstrand (Eric), and daughter-in-law Aytul Jordan. David is survived by his siblings, Richard Bartlett Jordan (Mary) and Gilbert Arnold Jordan (Evelyn). He loved his grandchildren, Amelia Jordan, Magnus Jordan, Isabel Jordan, Annika Cederstrand, and Avery Cederstrand. David was predeceased by his son, David Sean Jordan, and siblings, Willard Grenville Jordan, Jr., Priscilla Raymond, and Bradford Jordan. Funeral Notice: A graveside service with full military honors for Dr. David B. Jordan will be Monday, February 3, 2020 at 10 a.m. at the Main Street Cemetery in Dalton, MA, with the Rev. William Furey officiating. There will be no formal calling hours. In lieu of flowers, donations can be made to the New Jersey Traumatic Brain Injury Fund, in care of the Dwyer-Wellington Funeral Home, 220 East Street, Pittsfield, MA 01201 in his memory. Donations CANNOT be made online, but may be made through the Dwyer Funeral Home.

Dr. David B. Jordan, Ph.D., 84, a resident and former Councilman of Edgewater, NJ, passed away on Thursday, January 30, 2020, surrounded by his loving family. Born in Pittsfield, MA, the son of the late Willard G. and Winifred C. (Bartlett)... View Obituary & Service Information

The family of Dr. David B. Jordan created this Life Tributes page to make it easy to share your memories.

Send flowers to the Jordan family.