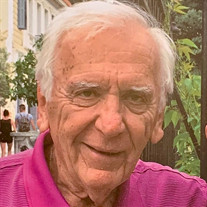 Mr. Demetrios “Jim” Panos, 80, of Pittsfield, MA passed away on January 11, 2020 at Berkshire Medical Center. Jim was born in Piraeus, Greece in 1939, and immigrated from Greece to the United States in 1959. After graduating from Western New England University with a degree in Mechanical Engineering in 1966, he began working for General Electric in the Manufacturing management Program. Holding many titles, he ended his 33-year career with GE as Senior Vice President of Corporate Business Development. He was the true immigrant success story. He was the son of Anthony and Efthalia Panou. He is survived by his wife of 40 years, Mary Jane Callahan Panos, his daughter, Joy Stauber and husband Jim, his son Anthony Panos and wife Susan, his grandchildren, Nathan Tratt, Jaime Panos and Joseph Stauber, his sister Eugenia Christodoulidis and husband Leo of Athens Greece as well as several cousins. He also leaves his brother in law, Ray Callahan and his wife Ann. Attending church daily with his mother in his younger years helped to instill his deep faith, a love of Chanting, his dedication to the Greek Church, and his belief that all he achieved he owed to God. As a member of Berkshire Hills Country Club, Jim was an avid golfer as well as a passionate card player with his Greek friends. He was past President of the Church Council, St. George Orthodox Church and a member of AHEPA. The family wishes to thank the nursing care at Berkshire Medical Center, Springside Rehabilitation Center and HospiceCare in the Berkshires for their wonderful care after his long and courageous battle with Alzheimer’s. Funeral Notice: Funeral services for Demetrios “Jim” Panos will be Tuesday, January 14, 2020 at 12 noon at St. George Greek Orthodox Church. Calling hours at the Dwyer Funeral Home will precede the service on Tuesday morning from 9:30 to 11:30 a.m. Burial will be at a later date. In lieu of flowers, donations in Jim’s memory can be made to St. George Greek Orthodox Church or the Alzheimer’s Association, in care of the Dwyer Funeral Home, 776 North St., Pittsfield, MA 01201. DONATIONS CANNOT BE MADE ONLINE, but may be made through the Dwyer Funeral Home.

The family of Mr. Demetrios "Jim" Panos created this Life Tributes page to make it easy to share your memories.

Send flowers to the Panos family.