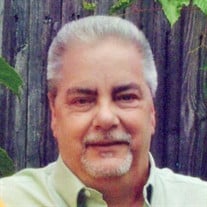 Mr. Donald L. Cripps, Jr., 72, of Dalton, passed away on Saturday, December 4, 2021. Born in Pittsfield, MA, on February 1, 1949, the son of the late Donald and Evelyn Mickle Cripps., he graduated from Wahconah High School with the class of 1966. Donald later attended classes at Berkshire Community College. Don was a Vietnam War veteran. In 1966, immediately following high school, he enlisted in the United States Navy Seabees, where he proudly served his country until 1972. After his time in the military, Don was employed by Lockheed Martin where he worked as a programmer, machinist and supervisor in the production department. It was from there that he retired in 1996, after more than 20 years of dedicated service. Donald was a lifetime member of the VFW, as well as a 30-year member of the American Legion. He was always cheering on a New England sports team, whether it be the Red Sox, Patriots, or Bruins. Don cherished his family, and especially enjoyed spending time with his grandchildren. Donald is survived by his beloved wife, the former Marie Adams, with whom he recently celebrated their 55th wedding anniversary. He leaves behind his children, Michael Cripps (Suzanne) and Matthew Cripps, as well as his former daughter-in-law, Amy Cripps. Donald also leaves behind his grandchildren, José, Michelle, Natalia, Brodie, and Colby Cripps, as well as his siblings, Kathleen Warman and Timothy Cripps. Besides his parents, Don was predeceased by his brother, James M. Cripps. Funeral Notice: Calling hours for Mr. Donald L. Cripps will be Thursday, December 9, 2021, from 4 pm until 6 pm at the Dwyer-Wellington Funeral Home in Dalton, 525 Main Street, Dalton MA 01226. Burial with full military honors will be held at a later date. Due to the recent rise in Covid cases, to best ensure everybody’s health, all who attend these services will be required to wear face masks. In lieu of flowers, donations in Don’s memory can be made to the Dalton Police Association or the Dalton Fireman’s Association in care of the Dwyer-Wellington Funeral Home.

Mr. Donald L. Cripps, Jr., 72, of Dalton, passed away on Saturday, December 4, 2021. Born in Pittsfield, MA, on February 1, 1949, the son of the late Donald and Evelyn Mickle Cripps., he graduated from Wahconah High School with the class of... View Obituary & Service Information

The family of Mr. Donald L. Cripps, Jr. created this Life Tributes page to make it easy to share your memories.

Send flowers to the Cripps, family.