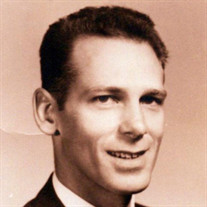 Mr. Donald "Don" T. Kasuba, 91, of Pittsfield, passed away at home on Tuesday, May 12, 2020, surrounded by his loving family. Born in Thompsonville, CT on April 27, 1929, the son of the late Stanley and Antonina Mahuj Kasuba, he attended prep school at Dean Academy and then graduated from Pittsfield High School in 1947. Donald received his undergraduate degree from Boston College, followed by his Masters from Michigan State University. Donald was a Korean War Veteran. He joined the United States Army in 1951 and proudly served his country until 1953. Even after his active service, Donald remained very much intact with the military. Each year, he was responsible for organizing the Memorial Day flag placement at veteran gravesites. In 2009, Donald was elected Veteran of the Year, and was recognized for a lifetime of dedicated service to the American Legion Post 68 for Pittsfield area veterans in 2011. For much of his career, he worked as a teacher and guidance counselor for both Pittsfield and Taconic High Schools. Donald was an avid sportsman beginning in his high school years and continuing throughout his life. In 2002, he was inducted into the Pittsfield Basketball Hall of Fame. He especially enjoyed golf and fishing and boating at Queechy Lake. Donald was an active participant in his community. He was a member of the Massachusetts School Counselor’s Association, the Elk’s Club, Knights of Columbus and the American Legion. Additionally, he participated in the allocation of scholarships for several programs. He was the director of VOFEDS summer school education at Pittsfield High and taught drivers’ education at Taconic. Besides his beloved wife of 65 years, the former Elizabeth “Betty” Dwyer, whom he married on May 31, 1954, Donald is survived by his children, Michael Kasuba (Mary Kay), Daniel Kasuba, Maureen Lindahl (Dan King), Matthew Kasuba, Mark Kasuba (Kathleen), and Christopher Kasuba (Patricia). He leaves behind 9 dear grandchildren, Tim, Nicole, TJ, Connor, Ryan, Brendan, Ryan, Kyle, and Brianna, as well as 1 great granddaughter, Emily. Donald was predeceased by his siblings, Edmund, Joseph, Alphonse, Edwin, Francis, Richard, Stanley, Clair, Helen, Teresa, Virginia, and Jean. The family would like to thank both BMC and HospiceCare in the Berkshires for their exceptional kindness and care. Donald was a kind and generous soul who greatly loved his family and truly appreciated life. He will be sadly missed, yet always remembered. Funeral Notice: There will be a private funeral service for Mr. Donald "Don" T. Kasuba. In lieu of flowers, donations can be made to HospiceCare in the Berkshires in care of the Dwyer Funeral Home, 776 North Street, Pittsfield MA 01201, in his memory. Donations CANNOT be made online, but may be made through the Dwyer Funeral Home.

Mr. Donald "Don" T. Kasuba, 91, of Pittsfield, passed away at home on Tuesday, May 12, 2020, surrounded by his loving family. Born in Thompsonville, CT on April 27, 1929, the son of the late Stanley and Antonina Mahuj Kasuba, he attended prep... View Obituary & Service Information

The family of Mr. Donald "Don" T. Kasuba created this Life Tributes page to make it easy to share your memories.

Send flowers to the Kasuba family.