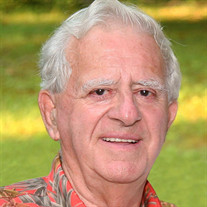 Donald Philippe Morin died on February 21, 2019 in Pittsfield, at home with his family, at the age of 89. Born in Schenectady, New York on August 20, 1929, Donald was the son of the late Phillipe and Eva (St. Hilaire) Morin. He was raised and educated in Schenectady and graduated from Mont Pleasant High School in 1948. He received an honorary discharge from the U.S. Army after serving from 1950-1952. In 1954 he graduated from the General Electric Apprentice Course. On June 30, 1956 Donald married Dolores Marie Bourdages in Sainte-Anne-de-Bellevue, Montreal, Canada. Not long after, they moved to Pittsfield, Massachusetts, where they raised their family; daughter Nancy and sons Michael and Alan. Donald retired from GE in 1989 with 39 years of service. He adored his wife of 62 years and was a dedicated father, brother, son, and grandfather. He loved music, gardening, photography, dancing and singing. He loved to travel with his wife and made trips to Europe, Canada, Mexico and the Caribbean. They enjoyed spending winters in Florida. In addition to his parents, Donald was predeceased by his sisters Rita Bowers and Jacqueline Sindoni. Donald is survived by his wife, Dolores Morin, his daughter Nancy Morin, and sons Michael (Stephie Fleck) and Alan (Margaret Round), grandchildren Sydney and Lewis Morin, and his siblings Carol Veach and Richard (Carolyn) Morin. Funeral Notice: Funeral services for Donald Morin will be Friday, March 1, 2019 with a Liturgy of Christian Burial at 11 a.m. at Sacred Heart Church, celebrated by Rev. Michael Bernier, Pastor. Burial with full military honors will follow at St. Joseph Cemetery. Calling hours at the Dwyer Funeral Home will be Friday morning, March 1st, 2019 from 9 until 10:30 a.m. In lieu of flowers, donations can be made to HospiceCare in the Berkshires, Inc. DONATIONS MAY BE MADE THROUGH THE DWYER FUNERAL HOME or directly online at www.hcib.org

Donald Philippe Morin died on February 21, 2019 in Pittsfield, at home with his family, at the age of 89. Born in Schenectady, New York on August 20, 1929, Donald was the son of the late Phillipe and Eva (St. Hilaire) Morin. He was raised and... View Obituary & Service Information

The family of Mr. Donald Philippe Morin created this Life Tributes page to make it easy to share your memories.

Send flowers to the Morin family.