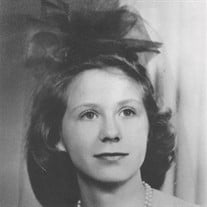 Dorothy S. Hill of Lenox, Mass. and formerly of Pittsfield, Mass. and Tampa, Fla., died Wed., March 25, 2020 at Kimball Farms Nursing Center in Lenox. She was 94. The cause of death was pneumonia unrelated to the coronavirus pandemic, her family said. She was a first-generation American, born in Chicago on Oct. 29, 1925. She was the younger of two daughters of the late Barbara (Howe) Scheer and John Scheer, ethnic Germans who came to America through Ellis Island in January 1921 and later became American citizens. Mrs. Hill’s childhood was difficult. The family moved from Chicago to New York City in search of work during the Great Depression, but there was little to be found. Sometimes, all they had to eat was bruised, discarded fruit. There were also struggles with severe illness, including diphtheria and scarlet fever. Mrs. Hill, called Trudy as a child by her family, persevered in school and was graduated from Grover Cleveland High School, Queens, N.Y. in 1943. Her parents had expected her to become a secretary. She had other ideas, however, and on graduation day her parents found out that she had never taken typing or shorthand classes. She had taken only college-prep classes, and announced that she had applied to Barnard College and been accepted. At Barnard, Mrs. Hill excelled at mathematics and physics. Some of her courses, mainly in physics, were taken at Columbia University because Barnard did not offer them at that time. She was accustomed to being the only female student, or perhaps only one of two, in her classes. When she was graduated from Barnard in 1947 with a Bachelor of Science degree, Mrs. Hill was the first person in her family to have earned a college degree. While a Barnard student, Mrs. Hill participated in WW II efforts on the “Home Front.” By hand, she made timing mechanisms for bombs at a converted Bulova Watch factory in Queens. She made other contributions to the American war effort that required an oath of confidentiality, and which she never revealed even to her husband or children. Against her parents’ wishes, she left New York City in 1947 to work at General Electric’s Large Transformer Division in Pittsfield, Mass. Her job was called “Calculator.” At night, she took graduate-level courses at Rensselaer Polytechnic Institution in Troy, N.Y. She defied her parents yet again when she rejected their attempts to select a husband for her. Instead, she married the love of her life, a GE engineer named Lee H. Hill Jr., a WW II Army veteran and graduate of Cornell University’s School of Engineering. The couple was married Sept. 9, 1950 at First Methodist Church, Pittsfield, where they had become acquainted in a young adult group while putting on a play. After her marriage, Mrs. Hill became a fulltime wife, mother of four, and dedicated volunteer at several organizations including the League of Women Voters and Planned Parenthood. From 1950 to 1972, the family was relocated several times by GE, first, from Pittsfield to Charlotte, NC; back to Pittsfield; then to Schenectady, N.Y.; to Columbia, S.C.; to Westchester County, N.Y., and finally, back to Pittsfield. Mrs. Hill continued her volunteer work in all of those locations but was especially active in the League of Women Voters when the family lived in South Carolina in the 1960s. She spearheaded a study of drinking-water quality in the state and helped register many African American residents to vote. In the latter role, she was one of two women who traveled to Spartanburg, SC, where they succeeded with a voter-registration drive, despite being met with outright hostility by the local police. Mrs. Hill remained interested in politics until the end of her life, watching recent debates and hearings on television. Mrs. Hill continued, also, to persuade people to register to vote. She was a devoted fan of Senator Elizabeth Warren. In 1973, after a long career as a devoted mother and nonprofit volunteer, Mrs. Hill accepted an official role at Hill-Donnelly Corp., a business owned by her family, in Tampa. She retired as Vice President and Treasurer in 2001 after many years of commuting monthly with her husband between Pittsfield and Tampa. She was pre-deceased by her beloved husband on Oct. 3, 2016 after 66 years of marriage. She was pre-deceased, also, by her parents, her sister Katherine S. Stephens and brother-in-law, Evan Stephens. Her eldest granddaughter, Anna Katherine Hill, died in 2012. Mrs. Hill approached old age with intelligence, grace, acceptance and courage. In her final years, she enjoyed video calls with her children and grandchildren; listening to opera; reading the large print edition of The New York Times; and playing with every dog brought by visitors to Kimball Farms Nursing Center. Surviving are her four children and their spouses: Lee H. Hill III (Patricia) of Brandon, Florida; Dr. Jonathan D. Hill (Sharon) of St. Louis; Helen Hill Kotzky (Brian) of Glen Cove, N.Y.; and Amy Hill Hearth (Blair) of New Jersey. Also surviving are five grandchildren, Alexander C. Hill of Tampa; Barbara Hill Feichtinger (Gerhard) of Dunedin, Fla.; Brigit Kotzky of Minneapolis; Kim Oliva (Daniel) of Brooklyn, N.Y.; and Charles Millner Hill of St. Louis. She is survived by one great-grandchild, Collin L. Hill of Tampa. Other survivors include a niece, Martha S. Seeger (Daniel) of Topanga Canyon, CA; and grandniece, Cassandra Seeger Oulton (Rupert), of London, England. She is survived, also, by her devoted caregivers and companions from Home Instead Senior Care of Pittsfield, particularly Liz Bartolini, Sharon Dewey, Sandy Kenyon, Jeanne Little, and Katie Montgomery, as well as the dedicated staff of nurses, aides and physical therapists at Kimball Farms Nursing Center. Services will be held at a future date. Her cremains will be buried next to her husband at Maple Grove Cemetery, Kew Gardens, Queens, N.Y. Donations in her name can be sent to Barnard College online or by mail at Box AS, 3009 Broadway, New York, NY 10027, or to a nonprofit of your choice.

Dorothy S. Hill of Lenox, Mass. and formerly of Pittsfield, Mass. and Tampa, Fla., died Wed., March 25, 2020 at Kimball Farms Nursing Center in Lenox. She was 94. The cause of death was pneumonia unrelated to the coronavirus pandemic, her family... View Obituary & Service Information

The family of Mrs. Dorothy S. Hill created this Life Tributes page to make it easy to share your memories.

Send flowers to the Hill family.