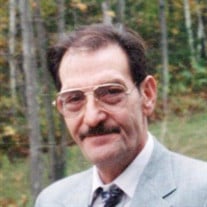 Mr. Edward “Eddie” Joseph Algerio, 80, of Pittsfield, passed away on Sunday, January 17, 2021 at Berkshire Medical Center. Born in Bronx, New York on August 2, 1940, the son of the late Cosini Algerio and Hazel Robinson, he was 1 of 5 children. He was a 1958 graduate of DeWitt Clinton All Boys High School in Bronx, New York. Eddie spent his youth as an avid baseball player with his most cherished memory being that of playing on the grounds of the new Yankee stadium. His employment began at Ronald Press Company, and he went on to Metropolitan Life Insurance Company selling insurance door to door until moving to Pittsfield in 1971. He rounded out his career at ITT Continental Baking Company as a devoted Route Salesman for Wonderbread. He devoted 26 years to promptness and the neatest of shelves and retired on his birthday in 1997. Eddie was a hard worker and a Jack of all trades enjoying painting, fishing, gardening, and everything New York Yankees. You could always find him tinkering around on a household project--he had a use for the smallest of items and found value in everything. He loved tending to his hanging plant “Molly” and feeding the neighborhood birds. He lived for soaking up the sun on his back deck, drinking a coffee and doing the Sunday crossword. He was a master of the game Jeopardy and rarely missed an episode. He found great interest in collectors coins and Mecum model cars; we know he’s riding along in the clouds in the driver's seat of a ‘64 Thunderbird. Throughout his life he enjoyed league bowling, passing along this same love to his family. Together they spent many years at the alleys. Eddie married the love of his life, Marianne Romano Algerio, in Yonkers, New York on November 26, 1965. They happily spent 55 years taking care of one another, always eating well and hollering at each other, the Italian love language we all know and love. Together they raised 3 children, Marianne Algerio Goodfellow, and her life partner, Corey Bond, of Pittsfield, MA; Frank J. Algerio and his wife, Susan Algerio, of Pittsfield, MA; and Danielle Algerio Raimer and her husband, Tony Raimer, of Dalton, MA. He leaves behind 7 grandchildren Rebecca Goodfellow and Katherine Goodfellow (daughters of family friend David Goodfellow), Courtney Corbett, Nicholas and Lia Algerio, Jennifer Raimer Giannino and Jill Raimer, as well as 3 great grandchildren Annabel, Juliet, and Avalyn. A friend to all, Eddie was a loving family man leaving behind a legacy of smiles, a good laugh and a kind demeanor. He will be sorely missed by those who loved him near and far. The greatest thank you to all of the Berkshire Visiting Nurse Association nurses, most specifically Lisa Cerveira, RN and all of the nurses on 4 East Progressive Care at Berkshire Medical Center for taking the greatest care of our Papa. Funeral Notice: Funeral services for Mr. Edward “Eddie” Joseph Algerio will be private. To view a live webcast of the service, please view http://www.dwyerfuneral.com/obituaries/permalink/9805775/LTWebcast Public calling hours will be Friday, January 22, 2021 from 4 p.m. until 7 p.m. at the Dwyer Funeral Home, 776 North Street, Pittsfield, MA 01201. In lieu of flowers, donations in his name can be made to St. Judes Children’s Research Hospital and the Wounded Warrior Project, in care of the Dwyer Funeral Home. Donations CANNOT be made online, but may be made through the Dwyer Funeral Home.

The family of Mr. Edward "Eddie" Algerio created this Life Tributes page to make it easy to share your memories.

Send flowers to the Algerio family.