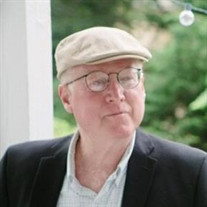 Edward “Ed” Esko, 71, beloved son, brother, husband, father, grandfather, teacher, and friend passed peacefully at home surrounded by his family on December 11, 2021. Born October 16, 1950 in Philadelphia, to Edward and Elizabeth Esko, he attended Abraham Lincoln High School, graduating with honors, then attended Temple University. Gifted with perfect pitch and a natural songwriting ability, he recorded several psychedelic pop tunes under the Mercury Records label as the Liberation News Service and the Esko Affair. Taking inspiration from the anti-war, pro-peace zeitgeist of the 60’s, Ed’s intuitive and curious nature led him to discover the power of food in influencing personal and planetary health. In 1972 Ed began studies with macrobiotic educators Michio and Aveline Kushi. Soon after he met and married fellow macrobiotic teacher and author Wendy Esko (Everett), raising a family together in Boston and then Becket, MA. Over the next four decades, from New York to London, and Tokyo to Dubai, Ed became a major advocate and teacher of macrobiotics, counseling and teaching people about food, nutrition, holistic health, the environment, and sustainability. A scholar, he dedicated years studying the intersection of Eastern philosophy and Classical arts and sciences, in particular the application of the principles of yin and yang to all modalities of life. A prolific author, he wrote and edited dozens of books, including Lightfood: Eating for Consciousness and Enlightenment, and The Yin & Yang of Baseball, inspired by trips with his father to Phillies stadium as a young boy. Ed was the founder of the International Macrobiotic Institute (IMI) in Massachusetts, and was a co-founder and Board member of Planetary Health, Inc. A natural born speaker with a warm sense of humor, he was able to command the attention and imagination of any room, whether speaking to few in a living room setting, or to hundreds in churches and large lecture halls. Ed touched the lives of thousands of individuals and families, helping them on their path toward health and peace, together dreaming of “One Peaceful World.” Papa to his children, Papa-Ed to theirs, he enjoyed spending time with family, often making the rounds on weekends, holding court for a night of Beatles singalongs, or playing and joking around with his many grandchildren. Ed later met his present wife Naomi, and together they enjoyed summer afternoons listening to classical music at Tanglewood, traveling, cooking, barefoot walks in the grass, movie nights, and sharing food with friends and family. Ever the optimist, he offered his family unconditional love, sage wisdom, and practical advice, all while celebrating life together. Ed is survived by his wife Naomi Ichikawa Esko of Pittsfield, MA; his children Eric and wife Caitlin Porter, Mark and wife Lena, Daniel and wife Sheri, Thomas and wife Sara, Julia and husband Jared Powell, Matthew, Amanda McIntyre and husband Christopher, Sennin, and Elizabeth; 17 grandchildren; his mother Elizabeth (Nana); brother Jeffrey; and several cousins and nephews. Edward is predeceased by his father Edward (Pop-pop), aunts Annie Limeres and Grace MacGregor, and cousin Greg Buffman. Funeral Notice: A memorial service is planned for Sunday, March 20, 2022, details forthcoming. Donations in Ed’s memory can be made to Planetary Health, 305 Brooker Hill Road, Box 487, Becket, MA 01223, or online at planetaryhealth.com.

The family of Mr. Edward "Ed" Esko created this Life Tributes page to make it easy to share your memories.

Send flowers to the Esko family.