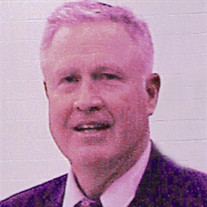 Mr. Edward J. Ladley, 78, of Pittsfield passed away at home on Wednesday, October 31, 2018. Born on Staten Island, NY on May 17, 1940 he was the son of James P. and Crescentia Stammberger Ladley. He attended Our Lady Queen of Peace and St. Peter’s High School in Staten Island. He attended Niagara University on an athletic scholarship, where he was captain of the basketball and baseball teams and where he met the love of his life, Rose Marie Dunagan. . After college, he joined the United States Air Force from 1963-1969 and served in Korea for a year while attaining the rank of Captain. After that time, he began teaching and coaching in Niceville, Florida before moving to Pittsfield, Massachusetts to begin his 42 year tenure as a teacher and Boys Varsity Basketball Coach at Wahcohah Regional High School in Dalton, Massachusetts. During this time he accumulated 500+ wins, 60 of those in the post season, five Western Massachusetts titles, and one very memorable State Championship in 1987. In 2012, the Wahchonah Regional High School gymnasium was forever renamed the “Edward Ladley Memorial Gynasium.” He was a member of the Niagara University Basketball Hall of Fame, the St. Peter’s High School Hall of Fame, the New England Basketball Hall of Fame and the MA Basketball Hall of Fame. He was the recipient of the Sherman Kinney Award – MIAA and the John Codey Award. He was a State Commissioner of the ASA, the MA Basketball Coaches Association, the IABBO #25, the National Indicator Fraternity, and the Berkshire County Softball Officials. Mr. Ladley leaves his wife, Rose Marie Ladley, whom he married on July 6, 1963 in Niagara Falls, NY. He also leaves his eight children, Edward M. Ladley and his wife Beth, Jennifer Cunagin and her husband Wayne, Rebecca Tobler, Sean Ladley and his wife Stephanie, Stephanie Brazeau and her husband Vincent, Timothy Ladley and his wife Amber, Erin Leonard and her husband Shawn, and Megan Muir and her husband Geoff; two brothers, Thomas Ladley and Peter Ladley and a sister, Crescentia Brynolfson; twenty grandchildren and several nieces and nephews. He was predeceased by his older brother, James Ladley. Funeral Notice: The Dwyer Funeral Home will host calling hours on Sunday, November 4th from 1p.m. To 4 p.m. Funeral services for Mr. Edward J. Ladley will be Monday, November 5, 2018 with a Liturgy of Christian Burial at 10 a.m. at St. Charles Church, celebrated by the Rev. A. Peter Gregory, Pastor Emeritus. Entombment will follow in St. Michael the Archangel Mausoleum in St. Joseph’s Cemetery. In lieu of flowers, donations can be made in his memory to the Lewy Body Dementia Association (www.LBDA.org) or to HospiceCare in the Berkshires in care of the Dwyer Funeral Home, 776 North St., Pittsfield, MA 01201. DONATIONS CANNOT BE MADE ONLINE, but may be made through the Dwyer Funeral Home.

Mr. Edward J. Ladley, 78, of Pittsfield passed away at home on Wednesday, October 31, 2018. Born on Staten Island, NY on May 17, 1940 he was the son of James P. and Crescentia Stammberger Ladley. He attended Our Lady Queen of Peace and St.... View Obituary & Service Information

The family of Mr, Edward J. Ladley created this Life Tributes page to make it easy to share your memories.

Send flowers to the Ladley family.