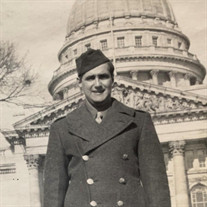 Mr. Edwin J. Zahn, 97, of Dalton, died Thursday, February 27, 2020. Born November 11, 1922 in Pittsfield, MA, the only son of Stephen and Susan Sammon Zahn, a communicant of St Mark's Church, and 1940 graduate of Pittsfield High School, he worked in the General Electric capacitor department and enlisted in the Army Air Corp on November 2, 1942. Mr. Zahn served in the 8th Air Force in the European Theater aboard a B-17 that was shot down during a mission on November 26, 1943. He was a prisoner of war until escaping in April, 1945 and reaching an embassy in France. He attained the ranks of Staff Sargeant and Technical Sargeant, earned a Purple Heart and a Good Conduct medal. Upon reapatriation he maintained his pilot's license, operated a garage on North St., was an armored car driver/guard and a custodian serving Pittsfield Public schools for 22 years. He made his home in Dalton, Pittsfield, Richmond, Sarasota, FL and New Lebanon, NY. In addition to his parents and his only sister, Mary, Mr. Zahn was predeceased by his wife of 66 years, Caroline Durkee Zahn, and his son, Stephen E. Zahn. Mr. Zahn is survived by his son, David L. Zahn (Judy Senger), his daughter, Katherine M. Zahn, 5 grandchildren -Becky (Todd Hoffmann); Hannah; Eric (Cameron Allshouse); Doug (Mallory Apple) and Emily Helleskov; and 7 great-granchildren. He leaves a daughter-in-law, Judy Zahn and a nephew and niece, Jim and Pat Durkee. Mr. Zahn's family expresses deep gratitude to the compassionate and diligent staff at Craneville Place, Dalton; Father Chris, St Agnes parish, Dalton; Dr. Barry Lobovits and Hospice. Funeral Notice: Funeral services for Mr. Edwin J. Zahn will be Wednesday, March 4, 2020 with a Liturgy of Christian Burial at 11 a.m. at St. Mark’s Church, celebrated by the Rev. Christopher Fedoryshyn, Administrator. Burial will follow in St. Joseph Cemetery. There will be no calling hours. In lieu of flowers, donations can be made to the Disabled American Veterans in care of the Dwyer Funeral Home, 776 North St., Pittsfield, MA 01201 in his memory. Donations CANNOT be made online, but may be made through the Dwyer Funeral Home.

The family of Mr. Edwin J. Zahn created this Life Tributes page to make it easy to share your memories.

Send flowers to the Zahn family.