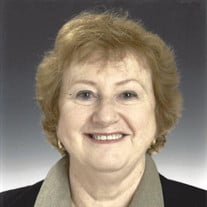 Elizabeth "Betty" Shalley Chludzinski passed away December 2, 2019 at the age of 78 at Kimball Farms in Lenox, Massachusetts after a long illness. She was born in Lee, Massachusetts, the daughter of John F. and Marion Finning Shalley in 1941. Betty lived in Lee, Great Barrington, Windsor, and mostly in Pittsfield. She graduated from Searles High School in Great Barrington where she was the class secretary of the class of 1958. She also graduated from St. Luke’s Hospital School of Nursing in 1961; she was the class president each of the 3 years in nursing school. She later graduated from American International College in 1979 with a baccalaureate in human services. In 1981, she graduated from Russell Sage College with a master’s degree in health education. She also took many courses at the Harvard School of Public Health. In her early career, Betty worked at the former St. Luke’s Hospital in the pediatric department; she followed this assignment by joining the faculty at St. Luke’s Hospital School of Nursing. Perhaps she was known best as independently teaching childbirth education classes for many years. She brought these classes with her when she became the health promotion coordinator at Berkshire Medical Center. She later became the health promotion coordinator for western Massachusetts for the Massachusetts Department of Public Health; through this position she chaired a health promotion council that carried out many public events including a district-wide walking program. She later became the associate director, and then the executive director, for the Lee Regional Visiting Nurse Association. She closed out her career by becoming the vice president of operations for the REACH Community Health Foundation, part of Northern Berkshire Healthcare, in North Adams. Betty served on many boards during her career. She was president of the St. Luke’s Alumni Association for a period of time. Her interests included gardening, reading, and following the Red Sox and Patriots. She enjoyed many of the cultural events that Berkshire County has to offer. She especially enjoyed the time spent with her family. She surrounded herself with friends and never lost contact if she could help it. Many of her friendships grew over the years and her closest friends were as dear to her as family. She was also involved with fundraising for nursing students in Tanzania and she was part of the Seton group, a local prayer group led by Sister Colette Hanlon, S.C. She married Theodore S. Chludzinski on May 25, 1963. Mr. Chludzinski passed away on November 25, 2011. She is survived by four children, Stephen F. Chludzinski of Framingham, MA; Dr. Paula M. Shaw, her husband Dr. David Shaw and their two children, Alexis and Rebecca, all of San Diego, CA; Anne E. Law, her husband Christopher and their children, Emily and William, all of Concord, MA; and Michael J. Chludzinski, his wife Christina and their children, Jackson and Campbell, all of Chelmsford, MA. She is also survived by her sisters Patricia J. Boudreau of Pittsfield, MA and Maureen F. Yaffe of Great Barrington MA. Funeral Services: Friends and family are invited to attend visiting hours Thursday, December 5, 2019 from 4 pm until 7 pm at the Dwyer Funeral Home, 776 North St. Pittsfield, MA. Funeral services for Betty will be held on Friday, December 6, 2019 with a Liturgy of Christian Burial at 11 a.m. at Sacred Heart Church, 191 Elm St. in Pittsfield, MA celebrated by the Rev. Frank Lawlor. Burial will follow at the Elmwood Cemetery in Great Barrington, MA. In lieu of flowers, donations can be made to the Kimball Farms Activity Funds LEP, 235 Walker St., Lenox, MA 01240 or to the National Aphasia Association, P.O. Box 87, Scarsdale, NY 10583, both in care of the Dwyer Funeral Home in her memory. Donations CANNOT be made online, but may be made through the Funeral Home.

Elizabeth "Betty" Shalley Chludzinski passed away December 2, 2019 at the age of 78 at Kimball Farms in Lenox, Massachusetts after a long illness. She was born in Lee, Massachusetts, the daughter of John F. and Marion Finning Shalley in 1941.... View Obituary & Service Information

The family of Elizabeth "Betty" Chludzinski created this Life Tributes page to make it easy to share your memories.

Send flowers to the Chludzinski family.