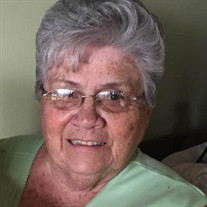 Elizabeth A. “Betty” Harrington, 82, of Pittsfield passed away peacefully on Thursday, January 17 at Berkshire Medical Center following a brief illness. Born on September 27, 1936 to Lewis F. and Helen “Red” McGivern Overbaugh, she was the fifth of seven children. She was a 1954 Pro Merito graduate of Pittsfield High School where she was a member of the cheerleading squad. An ambitious and hard-working woman, she began a 38 year career in the business office of The Berkshire Eagle after her graduation. She worked her way up the ladder and in 1971 she was promoted to the position of Display Advertising Manager. She was the first woman in the company’s history to ever hold that position. During her career there she also wrote a column, “Cooking With Love” for the Sunday Sampler. At the time of her retirement in 1992 she served as the manager for the Advertising Production Department. She was proud to work for the Miller family. In addition to her career, she enjoyed golfing, candlepin bowling, playing cards, traveling, and trips to the casinos, but the thing she enjoyed the most was cooking for her family and spending time at the various sporting events and dance recitals of her children and grandchildren and her cherished great-granddaughter. She attended St. Charles Church. On May 25, 1957 she married Robert J. “Manny” Harrington at St. Mark’s Church in Pittsfield. They enjoyed 38 years of marriage until his death on January 31,1996. Betty retired early so that she could be the primary caregiver to her husband for several years before he passed, a job she handled with a lot of compassion and love. She leaves behind to treasure her memory her daughter, Roberta L. “Robbie” or “Bird” Brassard and her husband Eric; her two sons, Christopher M. Harrington and his wife, Shauna and Patrick A. Harrington and his wife, Alison; her eight grandchildren, Halli Stewart and Brodi & Laken Harrington, Collin, Hayden & Cameron Harrington, and Michael & Ryleigh Brassard, and her great-granddaughter, Vera Rose Stewart. She also leaves her brothers, Lewis Overbaugh and his wife, Rita of Peabody, Mass. and James Overbaugh and his wife, Kim of Ballston Spa, New York, as well as her sister, Carole Jarvis, of Hollis, Maine, and her sister-in-law, Anne McGuigan. In addition to her husband and parents she was predeceased by her siblings, Jeanne Overbaugh, Ann Huggins and her husband Frank, Mary Jones and her husband Jack; her mother-in-law, Anna “Muth” Harrington; her brothers and sisters-in-law, Glenna Benoit and her husband Art, Richard Harrington and his wife Hectorine, Donald Harrington and his wife Olive, Eunice Calkins and her husband Joel, Shirley Tart and her husband Ray, and Mike Harrington and his wife Clare, and Jimmy McGuigan, as well as several nieces, nephews, and close friends. A shout out to the close group of friends that have included mom in lots of fun activities over the past 23 years She enjoyed your company immensely and looked forward to the time that she spent with each and every one of you. Especially thanks for the rides you gave her! Your friendship has been such a great source of comfort not only to her but to all of us as well. She leaves many friends, some of whom she has been friends with since elementary school. She always worked on her high school reunion and was looking forward to celebrating the 65th reunion this year. The family would like to thank the staff of medical professionals at BMC 5th floor and 2nd floor as well as the ER staff as well as the staff at Mt. Greylock Extended Care, and the staff at HospiceCare in the Berkshires. A special thanks to Dr. Sean Mulally. Although she was plagued by health issues these past few years, she never gave up. She was a loving Mom & Mimi. She stuck up for the underdog and always did the right thing. Her life was never easy but she made the best of the situation. She will be forever loved and missed. Funeral Notice: Funeral services for Elizabeth A. “Betty” Harrington will be Wednesday, January 23, 2019 with a Liturgy of Christian Burial at 10 a.m. at St. Charles Church, celebrated by Msgr. Michael Shershanovich. Burial will follow in St. Joseph Cemetery. Calling hours at the Dwyer Funeral Home will be Tuesday evening, January 22, 2019 from 4 to 7 p.m. In lieu of flowers, donations can be made to Moments House, in care of the Dwyer Funeral Home, 776 North St., Pittsfield, MA 01201 in her memory.

The family of Elizabeth A. "Betty" Harrington created this Life Tributes page to make it easy to share your memories.

Elizabeth A. “Betty” Harrington, 82, of Pittsfield passed away...

Send flowers to the Harrington family.