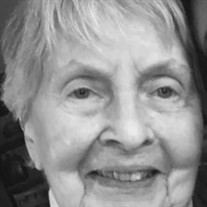 Dr Elizabeth F. Sayman, 91, 0f Rossiter Rd., passed away Sunday, March 7, 2021, at home, peacefully with family at her side. She was born April 14, 1929 in Wabash, Indiana to John L and Kathryn Ebbinghouse Ford. She graduated from Wabash High School and obtained a bachelor of Science degree from Mount Holyoke College. She then earned a master’s degree from Washington University and from there went on to earn her medical degree from the University of Chicago. It was there that she met her husband, Dr Wynn Sayman, who happened to be one of her professors. They both had ties to Massachusetts, and decided to settle in Richmond in 1965. Elizabeth worked in a cancer screening program at Berkshire Medical Center for ten years, offering mammograms and pap tests free of charge, to hospitalized women. In 1980 when Wynn retired, he and Elizabeth operated Wynn A. Sayman Antiques, which specialized in 18th century English Ceramics, a mail order and web-based business. They also worked booths at many antique shows across the country to gain exposure for their business. Elizabeth was an avid hiker, having hiked most of the trails in Berkshire County and surrounding areas with her close friend Mary Emery. She was also an avid gardener and flower arranger who adored the Berkshire Botanical Garden where she won many a blue and tricolor ribbon at the local flower show. Elizabeth was a member of the Berkshire Garden Club an affiliate of the Garden Club of America, and for many years held the title of Artistic Design Judge. She and her friend Lucia Stokes had more fun gallivanting around the area judging flower shows together. She was also a long-time member of T-Club, a local women’s group which gathered monthly for delicious meals and stimulating programs put on by members. Later in life Elizabeth enjoyed classes at IS-183, such as painting and working in pottery; hand building pieces in natural shapes, often impressing them with leaves or seed pods. Every week Elizabeth enjoyed the company of the Richmond “Coffee Group,” a diverse group of women who gathered at each other’s homes for strong coffee and interesting conversation. She was predeceased by her husband of 51 years, Dr. Wynn A. Sayman, whom she married on May 2, 1964. Wynn passed away on October 12, 2015. Elizabeth is survived by her daughter Lisa Butler Quetti and her husband John of Marco Island, FL and granddaughters, Elizabeth A. Butler, Beatrice K. Butler, Margaret K. Butler and their father Thomas. Funeral Notice: A graveside service for Dr. Elizabeth F. Sayman, at the Center Cemetery, in Richmond will be held at a later date, when Covid restrictions are lifted and all may safely gather. Donations in her memory may be made to HospiceCare in the Berkshires, The Richmond Land Trust, or Golden Paws Assistance Dogs in Naples, FL, where her daughter volunteers, in care of The Dwyer-Wellington Funeral Home, 220 East St., Pittsfield, MA 01201. Donations CANNOT be online, but may be made through the Dwyer-Wellington Funeral Home.

Dr Elizabeth F. Sayman, 91, 0f Rossiter Rd., passed away Sunday, March 7, 2021, at home, peacefully with family at her side. She was born April 14, 1929 in Wabash, Indiana to John L and Kathryn Ebbinghouse Ford. She graduated from Wabash High... View Obituary & Service Information

The family of Dr. Elizabeth F. Sayman created this Life Tributes page to make it easy to share your memories.

Send flowers to the Sayman family.