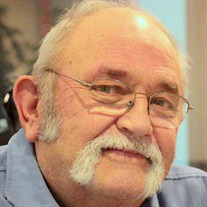 Mr. Eric “Rick” E. Newton, 70, of Pittsfield, passed away on Thursday, December 12, 2019. Born in Pittsfield, MA, on March 22, 1949, the son of the late Ellis and Vivian Sheldon Newton, he graduated from Pittsfield High School in 1968. Rick enlisted in the United States Navy. He was a Vietnam War veteran and served in the military from 1970 through 1972. He spent most of his Navy tenure aboard the USS Franklin D. Roosevelt, which was stationed for many months in Guantanamo Bay, Cuba. Rick was the co-owner of a family business started by his father Ellis in 1949, E.W. Newton and Son, Inc., an excavating and paving company. From a young age Rick fell in love with cars and machinery. He was a gifted mechanic and welder, building trucks and heavy equipment. His prized possession was a 1997 Peterbilt truck that he rebuilt himself, as well as a 1987 Auto Car. Rick leaves behind his 2 daughters and their families; Kristina Newton-Ulrich, Lars Ulrich and his grandson Finn Eric Ulrich of Hamburg Germany, and Vanessa Newton and Fernando Puyana of Framingham, MA. Besides his daughters, Rick is survived by his two sisters, Gail Clement and Brenda Delphia. He leaves behind his nephews Trevor and Justin Clement, and many cousins. Rick also leaves behind his former brother-in-law and close friend Paul LaCasse. Funeral Notice: Funeral services for Mr. Eric “Rick” Newton will be Thursday, December 19, 2019 at 1 p.m. at the Dwyer Funeral Home with the Rev. William Furey officiating. Calling hours at the funeral home will be held prior to the service, from 11 a.m. to 1 p.m. In lieu of flowers, donations can be made to the Danny Boy Adoption Fund or the Moments House in care of the Dwyer Funeral Home, 776 North St., Pittsfield, MA 01201 in his memory. Donations CANNOT be made online, but may be made through Dwyer Funeral Home.

The family of Mr. Eric "Rick" Newton created this Life Tributes page to make it easy to share your memories.

Send flowers to the Newton family.