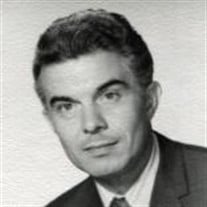 Mr. Erich J. Hegenbart, 87, of Pittsfield, passed away on Monday, October 7, 2019. Born in Baden, Austria, on January 31, 1932, the son of the late Rudolf & Monika Maier Hegenbart, he graduated from high school and then went on to vocational school where he learned the trade of typesetting. Erich worked as a color type printing pressman of Fine Arts for Max-Jaffe in Vienna, Austria. In 1960, he immigrated to New Jersey, where he began working at Triton Press in New York City. Mr. Hegenbart later settled in Pittsfield, MA, where he worked at Studley Press until his retirement in 2002. Erich was fond of art, and enjoyed both painting in water color, as well as pencil art. He was also an avid soccer fan who could always be found watching the game and cheering on his favorite team. Besides his wife, Theresia Spindler Hegenbart, whom he married on July 23, 1955, Erich is survived by his children; Ingrid Kraska (Edward) and Erich Hegenbart (Kim). He also leaves behind his grandchildren, Christina Hegenbart and Erich A. Hegenbart. Erich was predeceased by his brothers, Rudy Hegenbart and Josef Hegenbart. Funeral Notice: Funeral services for Mr. Erich J. Hegenbart will be Friday, October 11, 2019 from Dwyer Funeral Home at 11 a.m. with a Liturgy of Christian Burial at 12 noon at St. Charles Church, celebrated by the Rev. A. Peter Gregory, Pastor Emeritus. Calling hours will be Thursday afternoon, October 10, 2019, from 4 p.m to 7p.m. A celebration of life will be held in New Jersey at a later date. In lieu of flowers, donations can be made to HospiceCare in the Berkshires in care of the Dwyer Funeral Home, 776 North St., Pittsfield, MA 01201 in his memory. Donations CANNOT be made online, but may be made through the Dwyer Funeral Home.

Mr. Erich J. Hegenbart, 87, of Pittsfield, passed away on Monday, October 7, 2019. Born in Baden, Austria, on January 31, 1932, the son of the late Rudolf & Monika Maier Hegenbart, he graduated from high school and then went on to vocational... View Obituary & Service Information

The family of Mr. Erich J. Hegenbart created this Life Tributes page to make it easy to share your memories.

Send flowers to the Hegenbart family.