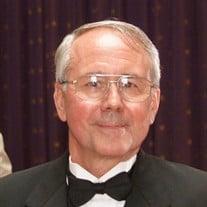 Mr. Eugene Donald Cornell, 76, of Pittsfield, passed away on Tuesday, October 29, 2019. Born in Akron, Ohio, on May 22, 1943, the son of the late Donald and Helen Metzger Cornell, he earned his Bachelor of Science degree from Russell-Sage College in Troy, New York. Gene served in the United States Army Reserve before he was honorably discharged in August, 1970. He then pursued a career in trust and estate planning. Gene worked as a Senior Trust Officer for various institutions, including The Trust Company of the Berkshires and Legacy Banks, before retiring in 2005. Gene was an active member of his community. After achieving the rank of Eagle Scout, he held many leadership roles with the Boy Scouts of America as an adult. He received the Silver Beaver Award in 1990. Gene was a communicant of St. Joseph Church in Pittsfield and served as a Eucharistic Minister. He was also active with the Parish Council as Chairperson and Financial Committee member. Gene enjoyed sharing his love of the outdoors and travel with family and friends, while enjoying the passions of reading and photography. Besides his beloved wife Jeanne Cornell, whom he married on April 15, 1967, Gene is survived by his children, Brian Cornell (Karin) of Gaithersburg, Maryland and Marci Jacques (Stephen) of Vienna, Virginia. He also leaves behind his two grandchildren, Aidan Jacques and Norah Jacques. Gene was predeceased by his sister, Janet Hemker. Funeral Notice: Funeral services for Mr. Eugene D. Cornell will be Friday, November 1, 2019, with a Liturgy of Christian Burial at 10 am at St. Joseph Church, celebrated by the Msgr. Michael A. Shershanovich, Pastor. There will be an hour of visitation at the church prior to the service, from 9 a.m. until 10 a.m. In lieu of flowers, donations can be made to the St. Joseph Parish or the American Heart Association in care of the Dwyer Funeral Home, 776 North St., Pittsfield, MA 01201 in his memory. Donations CANNOT be made online, but may be made through the Dwyer Funeral Home.

Mr. Eugene Donald Cornell, 76, of Pittsfield, passed away on Tuesday, October 29, 2019. Born in Akron, Ohio, on May 22, 1943, the son of the late Donald and Helen Metzger Cornell, he earned his Bachelor of Science degree from Russell-Sage College... View Obituary & Service Information

The family of Mr. Eugene D. Cornell created this Life Tributes page to make it easy to share your memories.

Mr. Eugene Donald Cornell, 76, of Pittsfield, passed away on...

Send flowers to the Cornell family.