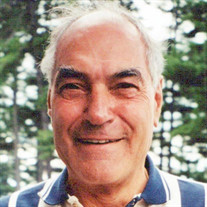 Eugene "Gene" Eksuzian, 89, of 306 Hancock Road, Pittsfield, MA passed away at home surrounded by family on Monday, November 2, 2020. Born in Pittsfield, on January 29, 1931, he was the son of the late Theodore and Frances Perego Eksuzian. He was educated in Lenox schools. He was a 1949 graduate of Lenox High School where he played 4 years of varsity basketball and varsity baseball. He was Captain of the LHS baseball team, Class President and President of Student Counsel. Gene joined the U.S. Navy directly out of High School and served on the USS Jeffers DMS 27 during the Korean war. When he returned from the navy, he married his wife, Margaret L. Teal on September 26, 1953. The couple just celebrated their 67th wedding anniversary this year. Mr. Eksuzian was employed by Western Mass Electric Company until his retirement from the company in 1980. He was more often known for his personal Appliance Repair Business which he continued until he and his wife began spending winters in Lake Worth, Florida. Many Pittsfield residents have, or have relatives that have, called Gene to fix a broken appliance. He was well known as a jokester and had many friends. Among his passions, Gene enjoyed all sports, the beach, parties with friends and family and making people laugh. He could often be found sitting out front of his house in the sun, reading the newspaper with a coffee (or beer). Gene was a long-time member of the Sons of Italy, ITAM Lodge #564 serving as a Trustee for many years as well as a Grand Delegate. He was also a member of the Italian American Club, the American Legion, VFW and Big Brothers. He was also a 5-gallon pin member of the American Red Cross for his dependable donations. Gene enjoyed playing softball for the City Slow Pitch League and later he played Bocci with the ITAM League for many years. Mr. Eksuzian was a communicant of St. Charles Church. Besides his wife, he leaves one son, Keith E. Eksuzian of Pittsfield, two daughters, Candice M. Forrest of Pittsfield and Stacie L. Schultheis also of Pittsfield; a sister, Theodora Blais and husband Richard of Pittsfield; five grandchildren; Cassidy Tatro, Cory Knysh, Brett Eksuzian, Markie Schultheis, Riley Schultheis and one great-grandchild: Violet Gelsomin Eksuzian. He also leaves several nieces and nephews, in-laws and many friends. He was predeceased by a sister, Anne Marie Milne of Lenox and a brother, Theodore Eksuzian of Pittsfield. Funeral Notice: Funeral services for Mr. Eugene "Gene" Eksuzian will be Friday, November 6, 2020 with a Liturgy of Christian Burial at 10 a.m. at St. Charles Church, celebrated by the Rev. A. Peter Gregory, Pastor Emeritus. For those who are unable to attend, a live webcast will be available. To view the service, please visit http://www.dwyerfuneral.com/obituaries/permalink/9706742/LTWebcast. Burial with full military honors will follow at St. Joseph Cemetery. Calling hours will be held Thursday, November 5, 2020, from 3 p.m. to 6 p.m. at the Dwyer Funeral Home, 776 North Street, Pittsfield, MA 01201. In lieu of flowers, donations can be made to HospiceCare in the Berkshires or the American Red Cross in care of the Dwyer Funeral Home, in his memory. Donations CANNOT be made online, but may be made through the Dwyer Funeral Home.

Eugene "Gene" Eksuzian, 89, of 306 Hancock Road, Pittsfield, MA passed away at home surrounded by family on Monday, November 2, 2020. Born in Pittsfield, on January 29, 1931, he was the son of the late Theodore and Frances Perego Eksuzian.... View Obituary & Service Information

The family of Mr. Eugene "Gene" Eksuzian created this Life Tributes page to make it easy to share your memories.

Send flowers to the Eksuzian family.