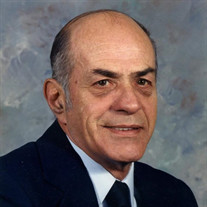 Frank Edward Miller, Jr, 93, went onto glory on February 7, 2022. He passed away at the home of his daughter Stephanie Filiault in Dalton, MA where he resided. He was born on October 18th,1928 in Pittsburgh, PA. to Frank E. Miller, Sr and Laura Bell Barker. He lived in Pittsburgh until the age of 4 when the family moved to Pittsfield, MA. He was educated in the Pittsfield Public Schools. He served in the Navy for 4 years. After an honorable discharge from the Navy he started work at General Electric and worked there for 42 years in the Ordnance Department in the Model shop. After his retirement he worked for Johnson Dealerships as a driver and worked at Big Y for 10 years until he finally retired. Frank built small electrical components for the Trident Missiles and worked on the very first electric car that GE built. He was even featured on 60 minutes. He always talked about his job at G.E. He was very talented in the things he did there and at home. He was an avid bowler and golfer, even getting a hole in one on Stephanie’s birthday the year that Carol passed away. Buzz, as his friends called him, enjoyed and collected trains. His whole dining room has a huge train set up, with villages. He had a small part that represented where he grew up in Pennsylvania. He had a school bus in honor of his granddaughter Piper, a church for his daughter Stephanie and even made a billboard with the engagement announcement of his first granddaughter Kayla and a skating rink for his grandson Gary. He married his beautiful wife Carolyn Harriet Cimini on September 3rd, 1955 at First United Methodist Church in Pittsfield where they were both members. She passed away after 36 years of marriage on April 25th, 1992. He is now reunited with the love of his life. Frank leaves behind 2 daughters Susan Miller Goodnow (Mychael) of Dudley, MA and Stephanie Miller Filiault of Dalton, MA 6 grandchildren, Kayla (James) Hayes of Mechanicville, VA, Gary (Lauren) Leach of Hendersonville, NC ,Piper Filiault of Dalton, Cristobel Filiault of Rhode Island, Keith and Jennifer Filiault of Adams..And 4 great grandsons Spencer, Abraham, Finn Hayes and Cameron Leach. He also leaves a brother John Roche of Pittsfield. Along with several nieces and nephews whom he loved very much. A sister Edna Cobb predeceased. The family would like to thank Hospice Care of Western & Central Massachusetts especially his nurse Rachelle and aide Kathy for the wonderful care and who made him smile even to the last days. In lieu of flowers, contributions in memory of Mr. Miller can be made to Berkshire Colonial Theater, where Frank was one of the original ushers. He loved this place and talked about it all the time, or to his granddaughter Piper Filiault’s dance and scholarship fund in care of the funeral home. He enjoyed watching her dance and never missed one of her dance recitals. He bought all of her pointe shoes, leotards and dance shoes throughout the years. He was very excited that she is going to college to pursue her dreams of dancing. Funeral notice: Funeral services for Frank Edward Miller, Jr., will be Monday, February 14, 2022, at 11 am at the First United Methodist Church in Pittsfield, 55 Fenn Street, Pittsfield MA 01201. Burial with full military honors will follow at Pittsfield Cemetery. Calling hours for Frank will be Sunday, February 13, 2022, from 1 pm to 3 pm at the Dwyer Wellington Funeral Home, 220 East Street, Pittsfield MA 01201. Due to the recent rise in Covid cases, to best ensure everybody’s health, all who attend these services will be required to wear a face mask.

Frank Edward Miller, Jr, 93, went onto glory on February 7, 2022. He passed away at the home of his daughter Stephanie Filiault in Dalton, MA where he resided. He was born on October 18th,1928 in Pittsburgh, PA. to Frank E. Miller, Sr and Laura... View Obituary & Service Information

The family of Mr. Frank E. Miller created this Life Tributes page to make it easy to share your memories.

Send flowers to the Miller family.