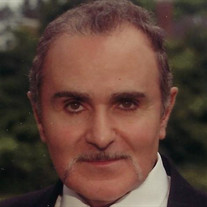 George Shogry Sr, 90, died peacefully at Craneville Place on Friday morning, January 24, 2020. George was born on May 25, 1929, son of the late Samuel Shogry and Elizabeth (Mekdeci) Shogry and was a 1947 graduate of Pittsfield High School. He served in the United States Army from 1950 until 1952 but came home on leave on December 27, 1950, so he could elope and marry his childhood sweetheart and the love of his life, Della Y. Bonneau. They remarried in Notre Dame Church in 1953 and spent 63 years together residing in Pittsfield. George was a meat cutter for the majority of his life and many knew him at Grand Union, First National, Adams, Big Y and Mazzeo's Meat Market. George was an avid reader, highly skilled marksman, body builder and collector of antiques. His children and grandchildren treasure the unique gifts they received from Dad/Grandpa over the years. His collections ranged from African wood carvings to Oriental Pottery and even Peanuts memorabilia. George loved sweets and looked forward to visits from his kids which always included chocolate, cider donuts or decadent desserts. George was incredibly generous and would often buy the entire box of candy bars that the neighborhood children sold to fund their afterschool programs. Body building was also a lifelong passion, and we recently found out that when he first came to Craneville Place, he was caught doing push-ups in his room at the tender age of 87. George was predeceased by his beloved wife of 63 years, the former Della Bonneau, who passed in 2014. George leaves his son George Jr. and his wife Sharon, his daughter Cindy Shogry-Raimer and her husband Nathan, all of Pittsfield, his three granddaughters, Heather Shogry-Williams, Erin Kent and Corrinn Arambula, his 4 great grandsons, Torin and Dellan Williams, Simon Kent and Atlas Arambula. He is survived by his brother Raymond and his wife Sharon of Naples FL and several nieces and nephews. FUNERAL NOTICE: A private graveside service for Mr. George Shogry, Sr. will be held for the immediate family. There will be no calling hours. In lieu of flowers, memorial contributions may be made to HospiceCare in the Berkshires or Elder Services in care of the DWYER-WELLINGTON FUNERAL HOME, 220 East St., Pittsfield, MA 01201. Donations CANNOT be made online, but may be made through the Dwyer Funeral Home.

George Shogry Sr, 90, died peacefully at Craneville Place on Friday morning, January 24, 2020. George was born on May 25, 1929, son of the late Samuel Shogry and Elizabeth (Mekdeci) Shogry and was a 1947 graduate of Pittsfield High School.... View Obituary & Service Information

The family of Mr. George Shogry, Sr. created this Life Tributes page to make it easy to share your memories.

Send flowers to the Shogry, family.