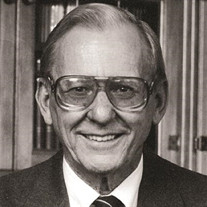 George W. Spasyk, 95, Indianapolis, died May 16, 2019. The former executive director of Lambda Chi Alpha Fraternity, George dedicated his life, unselfishly, to the development of collegiate men. The youngest of nine children, George was born in Pittsfield, Massachusetts on July 25, 1923, the son of George and Polly Weczerkovska Spasyk. After graduating from Pittsfield High School in 1940 at the age of 16, he entered a training program at General Electric Co. that sent him to nearby Williams College for intensive study in analytical chemistry. The next six years saw him working on the Manhattan Project while also serving in the United States Navy. He enrolled in the University of Michigan in the fall of 1946 where he joined Lambda Chi Alpha. After completing his graduate degree in business administration, he joined the staff of Lambda Chi Alpha as a traveling secretary. Two years later he became service secretary, in charge of the undergraduate operations of the fraternity. He would continue in that position until 1968 when he became executive director, a position he held until his retirement in 1990. He is survived by his nieces and a nephew, Stephanie Winslow and her husband James of Deerfield, FL, Paula Rivers and her husband Dick of Pittsfield, Marko Russell of Montpelier, VT and Michael Avery and his wife Joan of Williston, VT as well as a large extended family. He is preceded in death by his parents and eight siblings, William (Madeline), Steven (Dorothy), Peter (Ann), Michael (Helen), John (Jean), Nellie Caccamo (Dominick), Ann Spasyk and Mari Theilig (Paul). He was also predeceased by two nephews, Michael John Spasyk and Peter Spasyk. Funeral Notice: Funeral services for Mr. George W. Spasyk will be Monday, June 3, 2019 with a Liturgy of Christian Burial at 11 a.m. at St. Charles Church, celebrated by the Rev. A. Peter Gregory, Pastor Emeritus and concelebrated by Rev. John Tuohey. There will be an hour of visitation, prior to the service, at the Dwyer Funeral Home from 9:30 to 10:30 a.m. In lieu of flowers, donations may be made in his honor to the George W. Spasyk Memorial Endowment Fund of the Lambda Chi Alpha Educational Foundation, in care of the Dwyer Funeral Home, 776 North St., Pittsfield, MA 01201.

The family of Mr. George W. Spasyk created this Life Tributes page to make it easy to share your memories.

Send flowers to the Spasyk family.