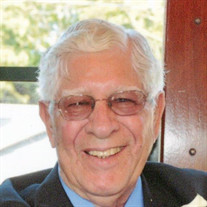 Papa Gus: Father, Grandfather, Great Grandfather Giuliano “Gus” Giusti, 91, of Pittsfield, passed away peacefully on Sunday, March 6, 2022, at his home. Born on November 22, 1930, the son of the late Giusto and Catherina graduated from the General Electric apprentice program in 1952. Gus was employed by General Electric, where he was a manger of manufacturing engineering. It was from there that he retired after 40.5 years of dedicated service. Gus’s family was his greatest joy in life. He loved every opportunity he had to spend time with them, especially when vacationing at Disney, or at the family home in Cape Cod. Gus was predeceased by his beloved wife of 54 years, the former Isabella Butrymowicz, whom he married on October 2, 1954 at St. Joseph’s Church in Pittsfield. Isabella passed away in 2008. He is survived by his two children, Nancy Orton (Bill Knight) and Alan Giusti (Karol), as well as his sister, Anna Murphy. Gus leaves behind his three grandchildren, Nicole Laughrey (Mikael), Jacqueline Orton, and Karina Giusti, as well as his great grandson, Connor Laughrey. Besides his wife and parents, Gus was predeceased by his sister, Tecla Giusti and his brother Albert Giusti. Funeral Notice: At his request, there will be no formal funeral services. In lieu of flowers, donations in his memory can be made to Make A Wish or HospiceCare in the Berkshires, in care of the Dwyer Funeral Home.

The family of Giuliano "Gus" Giusti created this Life Tributes page to make it easy to share your memories.

Send flowers to the Giusti family.