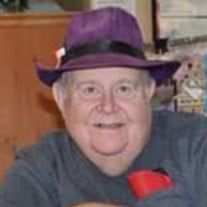 Mr. Glenn S. MacHaffie, 72, of Pittsfield, passed away on Monday, April 26, 2021 with his daughters and sister by his side. Born in Pittsfield on June 30, 1948, the son of the late William and Jeanne (LaRouche) MacHaffie, he graduated from Pittsfield High School and Berkshire Community College. He served in the Army during the Vietnam War. For the majority of his career, Glenn worked in sales for Mr. Nathan’s Shoe and Brookfield Shoes while living in Berkshires. When he relocated to Florida, he was employed by Pelts Shoes, from which he retired in 2010. Due to ill health, he returned to Pittsfield in 2013 and resided at Mt. Greylock Nursing Facility until his passing. Glenn loved watching the Yankees and absolutely loved to cook. He was especially known for his chili and famous coke ribs. Glenn was a great entertainer and even made a TV commercial for Pelts Shoes. He always enjoyed making people laugh. While at Mt. Greylock, he would dress up to entertain the nurses, whether it was playing Santa or even dressing up as a nurse himself. Glenn so appreciated all the nurses and staff. He made their day and they made his. He enjoyed so many things there, including craft fairs, Paint and Sip, cookouts in the parking lot with music playing, and every holiday celebration. His favorite thing was spending time with his grandchildren. Glenn is survived by his three children, Kelli MacHaffie, Arin MacHaffie, and Amy MacHaffie, as well as his siblings, Linda MacHaffie Levante (Glenn), Craig MacHaffie (Amy), and David MacHaffie (Jamie). He leaves 21 grandchildren, and 16 great grandchildren. Glenn is also survived by the mother of his children, Sally Bennett Walden. Besides his parents, he was predeceased by his son, Shaun MacHaffie, his siblings, Dale, Allan, and Lisa MacHaffie, and his sister-in-law, Rebecca Ross MacHaffie. Glenn’s family would like to extend their thanks and appreciation to everyone at Mt. Greylock for the outstanding care he was given during his years there. Funeral Notice: A private funeral service for Mr. Glenn S. MacHaffie will be held at a later date. In lieu of flowers, donations can be made to the charity of one’s choice, in care of the Dwyer Funeral Home, 776 North Street, Pittsfield, MA 01201, in his memory. Donations CANNOT be made online, but may be made through the Dwyer Funeral Home.

Mr. Glenn S. MacHaffie, 72, of Pittsfield, passed away on Monday, April 26, 2021 with his daughters and sister by his side. Born in Pittsfield on June 30, 1948, the son of the late William and Jeanne (LaRouche) MacHaffie, he graduated from Pittsfield... View Obituary & Service Information

The family of Mr. Glenn S. MacHaffie created this Life Tributes page to make it easy to share your memories.

Send flowers to the MacHaffie family.