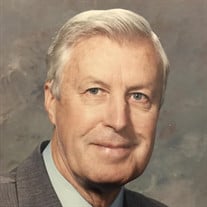 Mr. Gordon W. Duff, Sr., 98, of Pittsfield, passed away peacefully on Saturday, April 23, 2022. Born in Brockton, MA, on December 14, 1923, the son of the late Daniel and Joanna Ivers Duff, he graduated from Brockton High School and later earned an associate’s degree in electrical engineering and a bachelor’s degree in technology from Wentworth Institute of Technology. Gordon was a World War II veteran. He proudly served his country in the United States Army from 1943 to 1946 as a Radar Repairman and Rifle Marksman, grade t/4 (addressed as sergeant), in Co C 580th Signal Aircraft Warning, stationed in Hawaii. Decorations and citations include the Good Conduct Medal, The Victory Medal, the American Theater Campaign Ribbon, and the Asiatic Pacific Theater Campaign Ribbon. Gordon was employed by General Electric, where he worked as design engineer for Naval Ordnance. His first project was designing wire guided torpedoes. Over the years, he worked on fire control guidance systems, aircraft automatic pilot systems, Trident and Poseidon missile guidance systems, and numerous other projects. He dedicated thirty-six years of service until his retirement in 1985. He was a man of honor and integrity, intellect, and humor. Multitalented and skilled, Gordon believed that you could learn to do anything. He built a cottage, a speeding hydroplane, repaired cars and radios and televisions; he helped his son build a house in Becket. And when the computer age arrived, he was ready and able to tackle the technology as it developed. His grandchildren loved talking about their tech savvy “Pa” to their friends. He enjoyed the arts: photography and painting and big band music. He was athletic and an ardent waterskier, alpine skier, parasailing enthusiast, and sailor (he even took classes in celestial navigation to hone his sailing skills). Gordon shared these passions with his children and grandchildren who loved accompanying him on his adventures. A major team sports fan, having played in his youth, he was delighted when grandchildren and great grandchildren took up baseball and football. To him it was like watching the Red Sox or Patriots, whose games he watched faithfully and enthusiastically. He respected and enjoyed nature; family camping was summer vacation for many years. Gordon had a green thumb, growing the most difficult houseplants with ease. He was voracious reader and history buff. After retirement, he became interested in family genealogy, traveling to Nova Scotia to track his roots. He also enjoyed solving challenging puzzles and crossword puzzles. Family was always most important to him. He adored spending time with his grandchildren and great grandchildren as they did with him. Nothing could top Pa’s animal pancakes, bingo calling, boat rides, and games. His love and kindness were not limited to immediate family though. He was a thoughtful and caring uncle and loyal and dependable friend and companion. He was and is unforgettable. Gordon was predeceased by his beloved wife of forty-five years, the former Marjorie Snow, whom he married on August 16, 1946 and his son, Gordon Duff Jr. The youngest of seven, he was also predeceased by his brothers, Earl, Hugh, Donald, Eugene, and John, and his sister Daisy. He is survived by his daughters, Jo-Ann Callaghan and Polly Duff (Christopher Lapidus), his daughter- in- law, Deborah Duff, as well as 7 grandchildren: Kari LeBeau (Jeffrey), Abbie Callaghan, Darci Niedzwiecki (Ryan), Michaela Malloy (Thomas), Matthew Duff, Emily Duff, Lydia Duff, and eight great grandchildren: Micah, Keegan, and Ethan LeBeau, Brayden Gerlitz, George and Leo Niedzwiecki, and Elana and Bennet Malloy. Funeral Notice: Funeral services for Mr. Gordon W. Duff, Sr., will be private. Calling hours will be Wednesday, May 4, 2022, from 4pm to 5:30 pm at the Dwyer Funeral Home, 776 North Street, Pittsfield MA 01201. In lieu of flowers, donations in his memory may be made to the American Heart Association, heart.org or the Hunter Seven Foundation, hunterseven.org.

The family of Mr. Gordon W. Duff, Sr. created this Life Tributes page to make it easy to share your memories.

Send flowers to the Duff, family.