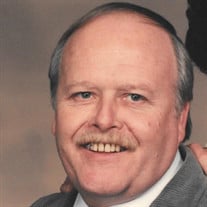 Mr. Gregory Joseph Carmel, Sr., 76, of Dalton, passed away on Sunday, June 16, 2019 at home. Born in Pittsfield on May 24, 1943, the son of the late Henry and Bernadette Owens Carmel, he graduated from St. Joseph High School in 1961. He then went on to earn his bachelor’s degree from Massachusetts College of Liberal Arts. In June of 1964, Gregory enlisted in the United States Army, where he proudly served his country, valiantly earning the title of a Vietnam veteran. Gregory worked as an ordnance buyer for the majority of his career at both General Electric and Berkshire Corporation. He was a member of the Dalton American Legion, as well as a Scout Master of Troop 4 in Dalton. Bowling was one of his favorite past times. He was also an avid Yankees fan and never missed an opportunity to cheer on his favorite team. Gregory leaves behind his wife, Carol Marchetti Carmel, whom he married on April 27, 1968 at All Souls Church in Pittsfield, MA. He is also survived by two of his children; Brian Carmel and Chrissy Carmel; his daughter-in-law, Diana Carmel; his sister Rosemarie Carmel Barzottini; 9 grandchildren; and 3 great-grandchildren. Besides both his parents, he was predeceased by his son, Greg Carmel Jr.; and his sister, Barbara Carmel Collins. Funeral Notice: As Gregory wished, there will be no services or formal calling hours. Instead, the family will host a time for friends to share memories and to come and go as they please at the Dwyer Funeral Home from 4 p.m. to 7 p.m. on Friday, June 21, 2019. In lieu of flowers, donations can be made to Troop 4 in care of the Dwyer Funeral Home, 776 North St., Pittsfield, MA 01201 in his memory. Donations CANNOT be made online, but may be made through Dwyer Funeral Home.

The family of Mr. Gregory J. Carmel Sr. created this Life Tributes page to make it easy to share your memories.

Send flowers to the Carmel family.