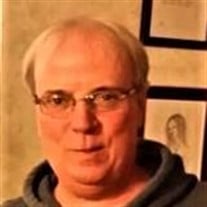 Gregory Paul Doyle of Pittsfield passed away at home on August 4, 2021 after a long battle with heart disease. Born on March 14, 1961, he was the son of the late Francis X. and Anna (Klekotka) Doyle. Gregg graduated from Pittsfield High School in 1980 and was employed by General Electric Company for several years. When the plant closed, Gregg earned his Certificate as an HVAC Universal Specialist from Ferris State University in 1993. After working for a local HVAC contractor, he opened his own business enjoying many years of busy work. He retired very early due to his heart condition. He greatly enjoyed boating, camping, and snowmobiling. He treasured his family and his time spent with them and their Sunday Dinners together. He also enjoyed the company of the children at family occasions and was loved by all of them. Gregg is survived by his sister Pauline Zervas of Pittsfield, brother Francis Doyle and his wife Nory of Maryland, sister Regina Doyle and her partner James Gioia of Maine, brother Anthony Doyle and his wife Maria of Dalton, sister Veronica Goerlach and husband John of Lanesborough, brother Laurence Doyle and wife Janet of Pennsylvania, brother Jerome Doyle and wife Theresa of Rockland, sister Therese Brigley and partner Scott Carpenter of Chesterfield, sister Celeste Doyle and partner Gary Chandler of California, brother Stephen Doyle of Pittsfield, brother Timothy Doyle and wife Angela of New York, and a sister-in-law Patricia Doyle of Dennis. He was also survived by many nieces, nephews, cousins, and friends who were all blessed to have known him. We are especially grateful for his friend Andy, who helped him to keep active and busy even as his health declined. He will be greatly missed for his kind and caring spirit. He was predeceased by his parents and brothers Edward, Christopher, and Vincent. There are no calling hours. His friends and loved ones are invited to join his family for his final family gathering to inter his ashes on Monday, August 16th at 2:00 PM. Interment will be at the Holy Cross section of Saint Joseph’s Cemetery on Pecks Road in Pittsfield. In lieu of flowers donations can be made to Davenport Child Care at PO Box 235, Chesterfield, MA 01012. Gregg was a long-time supporter of this non-profit child-care service for working hilltown families in and around Chesterfield.

Gregory Paul Doyle of Pittsfield passed away at home on August 4, 2021 after a long battle with heart disease. Born on March 14, 1961, he was the son of the late Francis X. and Anna (Klekotka) Doyle. Gregg graduated from Pittsfield High School... View Obituary & Service Information

The family of Mr. Gregory Paul Doyle created this Life Tributes page to make it easy to share your memories.

Gregory Paul Doyle of Pittsfield passed away at home on August...

Send flowers to the Doyle family.