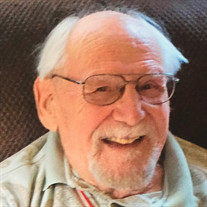 Mr. Harry Russell, Jr., 103, a lifelong resident of Dalton, entered eternal rest on Friday, October 30,2020. Born in Dalton on October 15,1917, the son of the late Harry and Julia Harris Russell, he graduated from the former Dalton High School in 1936. Harry was a World War II Veteran. He enlisted in the United States Army in 1943 and served with the 15th Lockheed P-38 Lightning Fighter Group during WWII. He was employed by Crane & Co. for over 50 years until his retirement in 1986. He was a Master Mason for 80 years at the Globe Unity Lodge in Dalton. Harry was predeceased by his beloved wife of 53 years, the former Rachael Dalgliesh. Rachael passed away in 1999. He is survived by their children, Margaret Batho (Lester) and Harry C. Russell (Elizabeth) He leaves behind five grandchildren and ten great grandchildren, as well as his sister-in-law, Jean Sciamacco (Rocco) and several nieces and nephews. Besides his wife, Harry was predeceased by his sister, Jeanette Weis, his great-great grandchild, as well as his loving companion of nine years, Dorothy Tetlow. Uncle Harry, as he was known to many, touched all who knew and loved him with his knowledge, countless stories, and undeniable wit. He will be greatly missed. His family would like to thank the staff of Sugar Hill Assisted Living and Craneville Place for the exceptional care given to Harry for the past two years. Funeral Notice: A graveside service for Mr. Harry Russell, Jr. will be held on Thursday, November 5, 2020 at 11:30am at Ashuelot Cemetery, 189 Ashuelot Street, Dalton, MA 01226, with the Rev. Henry Pascual, Pastor, officiating. Due to current restrictions, all attending are required to wear a face covering and adhere to social distancing. In lieu of flowers, as Harry had a special bond with children, in keeping with that, donations in his name, to be used specifically for a chronically ill child's wish, can be sent to Make-A-Wish Massachusetts & Rhode Island ,20 Hemingway Drive East Providence RI 02815, or mass.ri.wish.org.

The family of Mr. Harry Russell, Jr created this Life Tributes page to make it easy to share your memories.

Send flowers to the Russell, family.